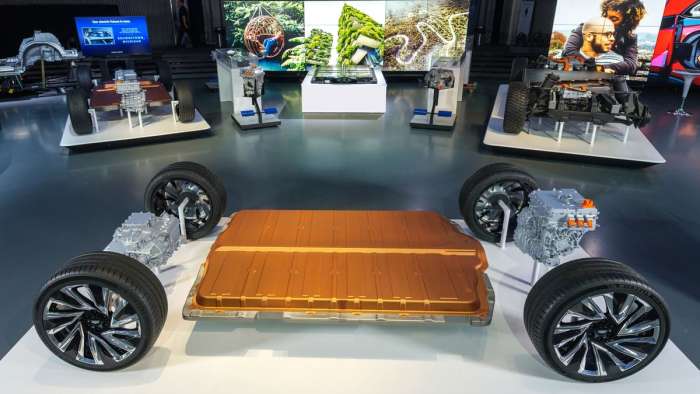 General Motors and Honda are partnering to build two more electric vehicles. Honda will design them but GM will build them on GM's new EV platform.
Advertisement

General Motors says it will build two all-new EVs for Honda. The auto giants say that Honda will design both the interior and exteriors of the new electric vehicles that will be built on GM’s flexible global EV platform. At this point, GM isn’t saying where the vehicles will be built, but it will be in North America.

GM has already said that the Detroit-Hamtramck plant is being retooled to build only EV vehicles going forward. On March 4th, 2020, GM unveiled its all-new Ultium battery. The automaker says the new type of battery system will significantly improve the range for its electric vehicles. The new Honda vehicles will be powered by GM’s new Ultium battery system.

GM is having success with its Bolt EV and has promised to have a fleet of electric vehicles available in the next few years. One of the vehicles that will be built at the Detroit-Hamtramck plant will be an all-electric pickup truck.
Sales for the new Honda EVs are expected to begin in the 2024 model year. The Honda EVs will be sold in both the U.S. and Canada.

GM and Honda Expanding Their Partnership

GM and Honda have been working together on EV projects since at least 2018. Honda has been helping work on the battery module, as well as fuel cell development. The two companies unveiled a joint design, In San Francisco, called the Cruise Origin earlier this year. The Cruise Origin is self-driving, electric vehicle.

"This collaboration will put together the strength of both companies, while combined scale and manufacturing efficiencies will ultimately provide greater value to customers," said Rick Schostek, vice president of American Honda Motor, "This expanded partnership will unlock economies of scale to accelerate our electrification roadmap and advance our industry-leading efforts to reduce greenhouse gas emissions. We are in discussions with one another regarding the possibility of further extending our partnership," Schostek said.

According to Doug Parks, GM vice president of Global Product Development, "This agreement builds on our proven relationship with Honda, and further validates the technical advancements and capabilities of our Ultium batteries and our all-new EV platform. Importantly, it is another step on our journey to an all-electric future and delivering a profitable EV business through increased scale and capacity utilization. We have a terrific history of working closely with Honda, and this new collaboration builds on our relationship and like-minded objectives."

As part of the agreement, Honda will use GM's OnStar safety and security services in the two EVs, integrating them with HondaLink. Additionally, Honda will make GM's hands-free advanced driver-assist technology available for buyers that want the new system.

It will be interesting to see how the prices compare for the all-new Honda electric vehicles and the General Motors vehicles that are built on the same platforms. They will presumably be built by the very same workers and have similar components. The purchasing decisions will mostly come down to brand loyalty and vehicle style.