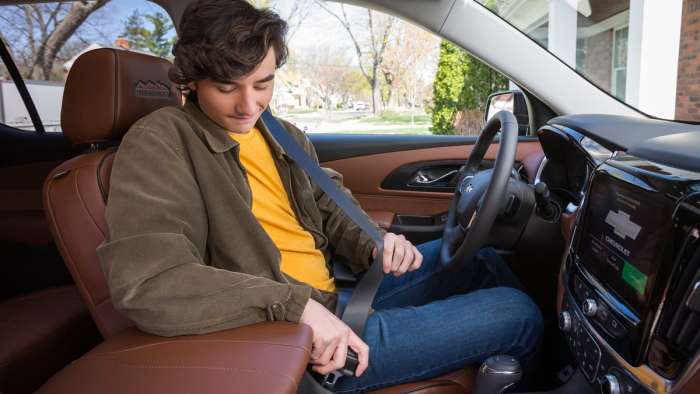 How Chevrolet Will Encourage Your Teens to Use Safety Belts

Summer marks the deadliest time of year for teens in auto accidents. Chevrolet has new technology designed to force teens to buckle up.
Advertisement

Chevrolet is adding a new weapon in the fight to keep teenagers safer behind the wheel. Chevy is the first in the industry with technology that will prevent teens from shifting the vehicle or using the radio until their belts are buckled. The Buckle to Drive feature will debut on the 2020 Traverse, Malibu and Colorado.

Buckle to Drive will be part of Chevrolet’s Teen Driver system that was introduced in 2015. The restrictions will only work when the Teen Driver mode is activated.

According to the Centers for Disease Control, the majority of teenagers involved in fatal car crashes aren’t wearing their seat belts. Crashes are the number one cause of death for teenagers in the United States. The CDC says that in 2016, 2,433 teens in the United States ages 16-19 were killed and 292,742 were treated in emergency departments for injuries suffered in motor vehicle crashes. Teens overall have some of the lowest rates of seat belt use.

“Buckle to Drive is Chevrolet’s latest feature designed to encourage young drivers to develop safe driving habits right from the start,” said Tricia Morrow, Chevrolet safety engineer. “Buckle to Drive is embedded in Chevrolet’s Teen Driver system and is aimed at helping remind teens to buckle up every time they get behind the wheel.”

Seat Belt Use is a Huge Industry Concern

Vehicle companies have struggled with ways to encourage better seat belt use for all ages of drivers. The National Highway Transportation Safety Administration finds that increased seat belt use is the best way to protect yourself in a crash. According to NHTSA, Of the 37,133 people killed in motor vehicle crashes in 2017, 47 percent were not wearing seat belts.

“Safety is our number one priority at Chevrolet,” said Morrow, the mother of a teen driver. “I come to work every day with my children in mind because there is nothing more important than their safety. My hope is that Buckle to Drive will help guide more young drivers to wear their seat belts and encourage positive conversations among teens, their peers and parents.”

How the Buckle to Drive Feature Works

The Teen Driver Mode gives parents a way to track how their teen is handling the vehicle by creating a report card of sorts.

The report card will indicate how far the vehicle was driven, the maximum speed, how many times the vehicle went over the speed limits, and the safety systems that were activated like antilock braking, stability control and forward collision alerts.

The Teen Driver system automatically mutes the radio until the driver and the front seat passenger’s belts are engaged. Parents can also set a maximum volume for the radio.

Parents can also activate a speed warning that will sound if the teen drives too fast. Parents can even choose to limit the maximum speed of the vehicle to 85 mph.

Summer is particularly deadly for teenagers. That is why you see so many states holding “Click it or Ticket” crackdowns during Summer months.

Jesse wrote on May 25, 2019 - 6:12pm Permalink
As a kid, I remember the "seat belt ignition interlock" on 1974 model year vehicles. Before the car would start, there was a "correct" sequence of events that had to happen or the car would not start. People raised such a stink that the law was repealed in 1974. Two things happened here: 1) people said "no way" to the interlock and 2) Congress listened and repealed the law. And interlocked vehicle owners could legally disconnect the interlock on their vehicle. My times have changed.