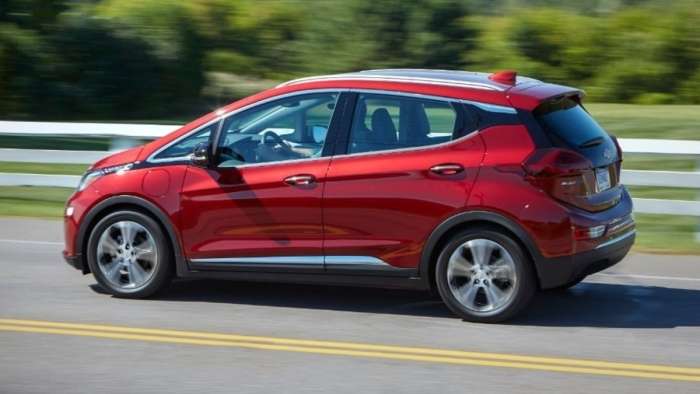 One of the most respected automotive sources is out with its list of top rated EV vehicles. U.S. News and World Report rates the Chevrolet Bolt as the top EV in 2021.
Advertisement

In honor of Earth Day, U.S. News and World Report is out with its list of Best Hybrid, Plug-in, and Electric Cars of 2021 and it contains a big surprise for Tesla fans. The magazine gives its highest rating to the 2021 Chevrolet Bolt, as the Best Electric Vehicle. U.S. News gives the Bolt its best overall score of 8.0 out of a possible 10. The magazine sums up the Bolt this way. “A combination of standout range and daily driveability make the Chevy Bolt an excellent affordable electric vehicle.”

U.S. News calls the 2021 Bolt “Well known as a top option among compact vehicles, boasting a practical interior and engaging handling.” The magazine goes on to praise the Bolt for its great EV range. “Where the Bolt really shines is its range; on a full charge, it’s rated to travel up to an EPA-estimated 259 miles, which is one of the best figures among affordable electric vehicles.” The 2021 Chevrolet Bolt stickers at $36,500.

The new ranking for the 2021 Chevrolet Bolt is impressive because GM has said from the very beginning that it intends to be the number one mass-marketer of electric vehicles. GM does not consider EVs to be niche vehicles, it sees them as the automaker’s future.

U.S. News rates the 2021 Tesla Y as its top Luxury Electric Vehicle. The magazine even mentions that Tesla is the most talked about nameplate in EVs. “Tesla’s cars and SUVs have dominated the EV conversation, and its latest Model Y isn’t ending the trend. It’s our best luxury electric vehicle this year thanks to a winning combination of quality and capability.” “Like other Tesla models, the Model Y also boasts some of the industry’s latest and greatest infotainment technology.” The 2021 Tesla Model Y is much more expensive than the Chevrolet Bolt. It runs $49,990. It is also larger, with seating for seven passengers.

Tesla is often the most controversial name in the EV field with yet another deadly accident occurring just days ago. Police say that a fully electric 2019 Tesla Model S, appeared to be operating on autopilot when it crashed killing two men onboard. Neither man was behind the wheel.

The 2021 Ford Escape Hybrid received the highest rating as Best Hybrid SUV. U.S. News praised the Escape for its fuel efficiency and handling among one of the fastest growing-hybrid segments. “The Escape Hybrid is also one of the most fuel-efficient hybrid SUVs available, with an EPA fuel-economy estimate of 41 mpg combined. At $27,605, it has a below-average MSRP among hybrid SUVs.”

You see the full list of the U.S. News and World Report rankings here. The magazine has been rating EVs since 2018.