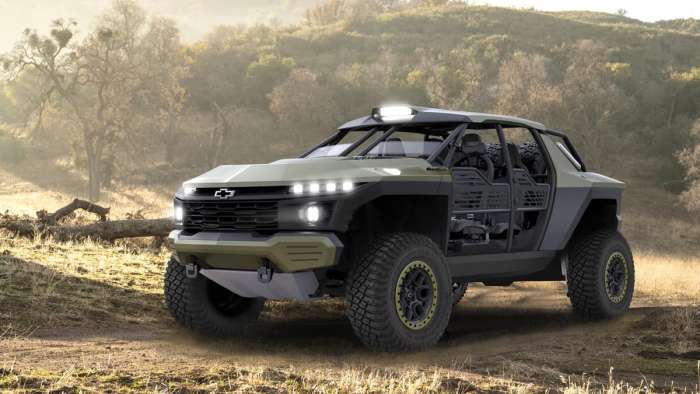 Chevy has modified a Silverado to conquer off-roading once and for all. See the truck built for speed and optimal off-road handling.
Advertisement

Chevrolet is roaring into the annual SEMA show, riding on a supercharged, extreme off-road concept named ‘The Chevy Beast’. Chevy will have eight trucks and SUVs on display at the annual Specialty Equipment Market Association show that highlights performance and personalization. It is the Beast, based on the Chevrolet Silverado 1500 chassis, that will have everyone talking.

SEMA focuses on the art of the possible. This year, the talk for all of the automakers seems to be about extreme off-roading. Chevy Performance answered the challenge and designed the ultimate off-roader. The Chevy Beast sits on a modified Silverado chassis, with a customized pickup body. A custom-designed, 4130 chromoly tubular safety structure, including tubular doors, was built in for added protection. It is powered by a Chevrolet Performance LT4 650-horsepower supercharged V-8 crate engine.

“The Chevy Beast concept takes the popularity of high-performance off-road trucks to the next level,” said Jim Campbell, GM U.S. vice president of Performance and Motorsports. “It’s a vision for a new dimension of Chevrolet Performance capability from a brand that’s been pioneering performance and supporting customer personalization for more than 50 years.”

According to Chevrolet, a one-of-a-kind off-road suspension was built for the Beast, including a five-link rear suspension. The beast rides on 20-inch beadlock wheels with huge 37-inch off-road tires. The vehicle has a widened stance for more stable handling, especially during high-speed off-roading. The enormous tires allow the Beast to have an approach angle of 45 degrees, a departure angle of 46.5 degrees and a breakover angle of 35 degrees. It has 13.5 inches of ground clearance.

“There’s nothing else like The Chevy Beast,” says Jeff Trush, GM program manager, Pace Car and Specialty Show Vehicles. “It delivers a ton of performance and capability, which makes it adept at conquering rough terrain — and it flat-out flies in desert running.”

Other Chevrolet Vehicles on display at SEMA include:

Rob wrote on November 3, 2021 - 2:20pm Permalink
Maybe I'm getting old and especially with our gas prices rocketing but is anybody really interested in a pickup with 650HP?

LG's New EV Battery Plant Is a Welcome News for Tesla
Tesla Giga Berlin's New Hurdle: It's Not Only the Gov't, but Now Tesla Itself
END_OF_DOCUMENT_TOKEN_TO_BE_REPLACED