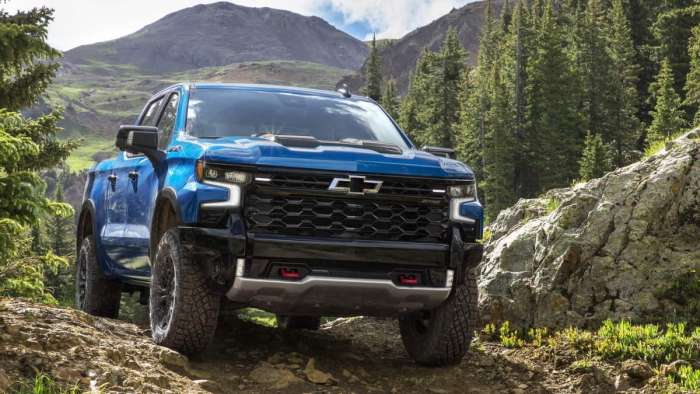 Chevrolet rolled out its redesigned 2022 Silverado and it includes major upgrades to its interior, technology and off-roading ability. It is as if Chevy went down the checklist of what it would take to outdo its competition and added all of the items that fans have talked about. The 2022 Chevrolet Silverado ZR2 adds all the bells and whistles, including a factory lift, straight from the factory. The Chevy is calling the ZR2 its new flagship truck.

“The Silverado is legendary and continues to excite both new and loyal customers. For the new 2022 model, we’ve enhanced the Silverado lineup to build on its success, giving customers more choice, a refined design and new technology options,” said Kelly MacDonald, director, Chevrolet Truck Marketing. “The addition of the all-new Silverado ZR2, Chevy’s flagship off-road truck, builds on an already strong portfolio of factory lifted pickups from Chevrolet that are bringing in new buyers.”

Most of the trim levels feature Google built-in with access to Google Assistant, Google Maps and Google Play right on the infotainment screen.

The 2022 Chevrolet Silverado contains lots of new technology, including available Super Cruise driver-assistance technology on High Country model. Buyers will also be able to get Super Cruise with Trailering later.

Also, in the presentation, Jaclyn McQuaid, the chief engineer of Chevrolet Full-Size Trucks said that Chevy believes you should “Race what you sell and sell what you race”. Chevrolet did extensive testing on the new ZR2 equipped truck to make sure it would stand up in grueling conditions.

“Chevrolet has been competing on some of the most grueling, toughest off-road courses with a prototype Silverado ZR2 in the Best in the Desert race series,” said Dom Lester, General Motors chief engineer, Performance Variants, Parts and Motorsports Engineering. “We applied what we learned in racing and Moab testing to the new ZR2 to offer a supremely capable and confidence-inspiring package, but one that doesn’t beat you up on the highway with its ride quality. It’s equally capable and comfortable.”

The refreshed Chevrolet Silverado arrives at dealerships in spring 2022. Chevrolet’s official statement is that the current chip shortage problems are not expected to delay the new truck’s arrival.