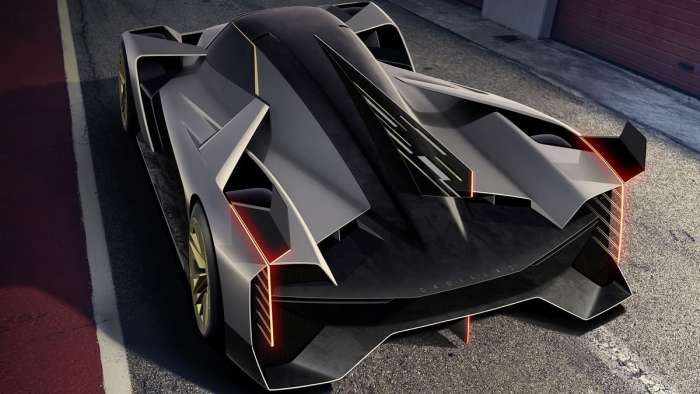 Cadillac Commits to Racing in New Series in 2023

Cadillac confirms it is developing a fourth-generation Cadillac V-Series prototype to compete in a new race series that debuts in 2023.
Advertisement

The sketch of Cadillac’s future race car looks more like a futuristic batmobile than a current race car. Cadillac is confirming that it is already working on a fourth-generation Cadillac V-Series Prototype to compete in the new Le Mans Daytona hybrid category in 2023. The news comes just two weeks after Cadillac released its new 2022 CT4-V and CT5-V Blackwing editions.

“For nearly 20 years, Cadillac V-Series has brought winning technologies from the racetrack to our performance cars on the road,” said Rory Harvey, global vice president, Cadillac. “We look forward to continuing that heritage by competing in this exciting new chapter at the highest level of international motorsport.”
Acura, Audi, BMW and Porsche are also developing LMDh entries for the new race competition. The new race cars will be based on a standardized chassis and incorporate an internal combustion engine and a hybrid powertrain. The vehicles will all have distinctive bodywork.

“The IMSA LMDh category is looking to be very competitive with multiple manufacturers,” said Gary Nelson, AXR team manager. “We’ve had a lot of success running the Cadillac DPi-V.R as one of the original teams since 2017, and we are looking forward to being a part of the next chapter of Cadillac Racing.”

Cadillac Racing and the Cadillac DPi-V.R. race car have been very successful. Recent achievements include:

Cadillac’s commitment to performance is embodied in the V-Series portfolio. Just two weeks ago, Cadillac announced its most powerful sedan ever.

According to Cadillac, “The CT5-V Blackwing is the most powerful and fastest Cadillac production model in history — with a top track speed of more than 200 mph”. The CT5-V Blackwing uses an upgraded and hand-assembled 6.2L supercharged V-8 rated at 668 horsepower and 659 lb-ft of torque. The automatic version, with paddle shifters, does 0-60 mph in 3.4 seconds. The CT5-V with a manual transmission does 0-60 mph in 3.6 seconds.

“We have combined thoughtful technology and luxury with a driving experience that’s clearly V-Series,” said Brandon Vivian, executive chief engineer, Cadillac. “By incorporating the technologies and expertise learned on the track, Cadillac V-Series continues to build incredible performance vehicles for the road with zero compromises.”