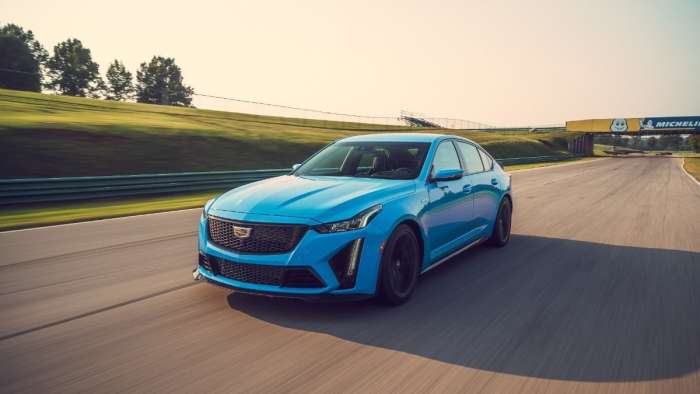 Cadillac is Releasing A CT5-V Blackwing with 668 Horsepower

Go big or go home! Cadillac may be going all electric but before it does, it is releasing two incredible sedans. The Blackwings are finally available.
Advertisement

Cadillac is out with its fastest production models ever, promising that these vehicles will achieve new heights of performance, technology and craftsmanship. Sadly, Cadillac has already announced that it will go all-electric by the middle of this decade. It appears it saved its best internal combustion engine Cadillacs for last. The 2022 Cadillac CT5-V Blackwing has an astounding 668 horsepower, while the smaller 2022 Cadillac CT4-V Blackwing is rated at 472 horsepower.

“Driving is always a blend of the quantifiable and the subjective, and in both regards, the new CT4-V Blackwing and CT5-V Blackwing deliver like few other luxury sport sedans,” said Mirza Grebovic, Cadillac performance variant manager. “They’ve got the numbers to stand with the world’s best, but they also transcend the stopwatch with the sort of satisfying driver experience that cannot be defined by lap times alone.”

According to Cadillac, “The CT5-V Blackwing is the most powerful and fastest Cadillac production model in history — with a top track speed of more than 200 mph”. The CT5-V Blackwing uses an upgraded and hand-assembled 6.2L supercharged V-8 rated at 668 horsepower and 659 lb-ft of torque. The automatic version, with paddle shifters, does 0-60 mph in 3.4 seconds. The CT5-V with a manual transmission does 0-60 mph in 3.6 seconds.

Cadillac thought it was important to offer both versions with a standard six-speed manual or a paddle-shift automatic.
“For nearly two decades, enthusiasts have told us how important it is to have the control of a manual gearbox in their performance sedan,” said Grebovic. “The ability to choose the driving experience they want is a luxury in and of itself, allowing them to feel more connected with the vehicle.”

The first 250 of each of the CT4-V Blackwing and the CT5-V Blackwing are being treated as collector’s editions with special collector plates on the sills and B-pillars. The plates will be signed by members of the Cadillac-V teams that worked on the vehicles. Similarly, there will be special plaques on the hand-built engines in the CT5-V.

“The V-Series Blackwings are really special vehicles,” said Darci Marcum, Lansing Grand River Assembly plant director. “The first 250 CT4-V Blackwing and CT5-V Blackwing builds have collector’s edition touches. We are excited to reveal sill plates that have been signed by an employee directly involved in the development of these cars.”

The Blackwings are built based on Cadillac’s winning race team performance. The cars' aerodynamics draw from the race cars, plus they also incorporate special components needed for cooling and controlling high horsepower vehicles. The CT5-V Blackwing has the largest factory-installed brakes in Cadillac history. Both models have enhanced suspensions giving smoother rides and increased control. Both vehicles will offer the latest bells-and-whistles available, with three different types of interiors. Carbon-fiber trimmed racing seats are available for the CT5-V.