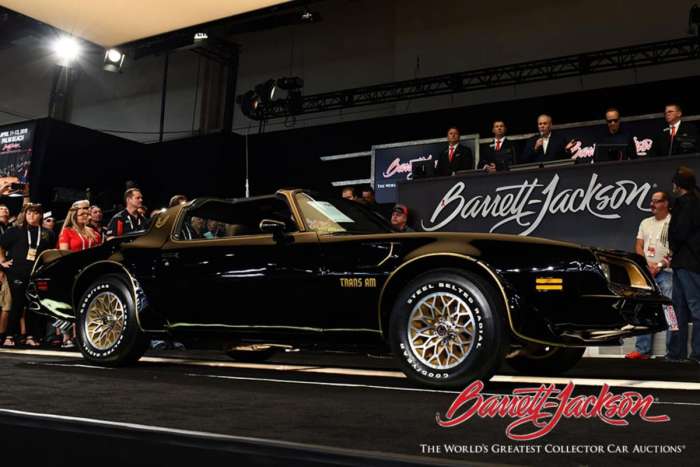 Burt Reynolds' Bandit Re-creation is one of Auction's Top Sellers

Three of the late Burt Reynolds' movie car re-creations sold at the Barrett-Jackson Las Vegas Auction. One of the vehicles brought in big money.
Advertisement

The 11th Annual Las Vegas Barrett-Jackson Auction sold 100 percent of the vehicles it had up for auction and one of the top sellers was a Re-Creation of a famous Burt Reynolds’ movie car. A 1978 Pontiac Firebird Trans Am that was an exact duplicate of the “Black Bandit” from Reynolds’ hit movie “Smokey and the Bandit” brought in a whopping $192,500, making it one of the auctions’ top sellers.

Most Valuable of Reynolds’ Movie Vehicles

Barrett-Jackson described the vehicle from Reynolds’ personal collection this way. “From the Burt Reynolds Collection and Bandit Movie Cars Florida, LLC. The “Black Bandit” was created under Mr. Reynolds’ direction. He wanted a car that was as movie-correct as possible and could be driven with some new comforts, yet still retain its originality. It features new air-conditioning components and a custom-built 200-4R automatic transmission made specifically for Mr. Reynolds’ project. Powering this Trans Am is a freshly rebuilt Pontiac 400ci engine with all-new Butler Performance parts.” The Trans Am is said to be an exact duplicate of the car used in “Smokey and the Bandit” – right down to the CB antenna.”

In its follow up to the auction, Barrett-Jackson says it was bittersweet to see the famous actor’s vehicles cross the block. “The moment was bittersweet, as the late Hollywood icon had planned to attend the event, but instead a tribute was paid to the legendary actor prior to the sale of his vehicles, reflecting on the times he spent at Barrett-Jackson.”

The auction house released a statement following the actor’s death September 6th, 2018. “All of us at Barrett-Jackson were deeply saddened to hear of the passing of our dear friend Burt Reynolds. We will always treasure the many special moments he shared with us and are honored to have several of his cars crossing the block at our 2018 Las Vegas Auction.”

The 1978 Pontiac Firebird Formula that was an exact duplicate of the vehicle used in the movie “Hooper” brought in $88,000. The movie co-starred Jan Michael Vincent and was also a fan favorite. The car was described as Burt Reynolds’ personal Retro-Rocket. “This Firebird Formula is one of the last cars in Mr. Reynold's personal collection and it’s powered by a 403ci V8 engine and a 3-speed automatic transmission.” It also has new air-conditioning and all-new Butler Performance Parts. The car also included a replica of the silver jacket that Reynolds wore in the movie.

The 1987 Chevrolet R30 Pickup from “Cannonball Run” sold for $49,500. It was a re-creation of the Indy Hauler that was featured in the 1981 movie about cross-country auto racing called “Cannonball Run”. The movie featured a stunt with the truck supposedly jumping over a moving train.

The truck “has custom two-tone paint re-creating the Indy Hauler livery used on the movie truck. Under the hood is a 496ci V8 engine with FiTech fuel injection and 4L80E automatic transmission. Upgraded with modern comforts like power steering, power brakes and air conditioning. CARFAX shows California damage report on 04/08/2009: Accident reported, vehicle involved in a sideswipe collision involving side impact with another motor vehicle.”

Reynolds was quite the car collector at the height of his fame. In recent years, he had started selling off some of his more well-known vehicles. All three of the vehicles that sold in Las Vegas, two Pontiac Firebirds and a 1987 Chevrolet pickup were part of Reynolds’ personal collection and signed by the actor.

Reynolds died from a heart attack at the Jupiter Medical Center in Jupiter, Florida on September 6, 2018 at the age of 82. While he made dozens of films and starred in several different television shows, Smokey and the Bandit I and II, Hooper, and Cannonball Run were favorites with audiences. The three vehicles that sold this weekend are said to be the last of his personal collection.

According to Barrett-Jackson, nearly all of the vehicles that Reynolds owned were re-creations of cars used in his films. “The original cars used in the movies were disposed of, due to liability reasons,” says Reynold’s friend and business partner Gene Kennedy of Bandit Movie Cars Florida. “Universal Studios wouldn’t allow the sale of cars that may have had some frame damage from the stunts performed.” They’ve worked extensively with Restore a Muscle Car in Nebraska to make sure the re-creations are kept to the level of restoration and value they should be. “They’re historic pieces of time from the ’70s,” says Kennedy, “and we want to keep them that way.” Kennedy worked with Reynolds on the re-creations and served as a caretaker for Reynolds’ vehicles.

A fourth Burt Reynolds vehicle also sold at the auction, but it wasn’t a movie car. A 1984 Pontiac Firebird Trans Am that Reynolds used to promote his USFL team, the Tampa Bay Bandits was also auctioned.

No word on what the buyers intend to do with the vehicles.You can check out other famous movie cars at the Internet Movie Cars Database.