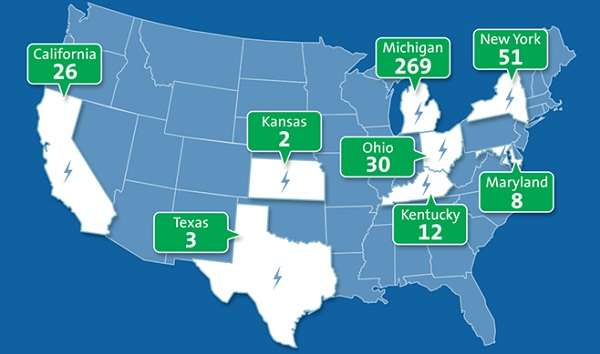 GM takes workplace charging to a new level, others should follow

General Motors is doing its best to convince the world that it is fully committed to the success of electric vehicles. The company now boasts 401 electric vehicle charging stations at its U.S. locations.
Advertisement

Workplace charging is one of the most important factors in increasing the rate of EV adoption. The topic has been discussed at length here at Torque News; providing workplace charging not only increases effective range of employees’ EVs but also has a great impact on public awareness.

Charged EVs reported Wednesday that GM now has installed 401 charging stations at its manufacturing, engineering, and business locations in the United States. The electricity use is free to employees as well as visitors, and 20% comes from solar canopies.

The widespread installation of charging stations at GM workplaces was not just an attempt to encourage employees to purchase the company’s plug-in offerings, but rather was in response to employee demand.

In Michigan, demand for electric vehicles among GM employees is particularly strong. This is reflected by the 269 charging locations in the state, though the number is also high due to the high concentration of GM facilities there. Overall, about 35% of the installed chargers are Level I with the remainder Level II.

“Workplace charging is one of the most important things a company can do to raise plug-in electric vehicle awareness and energize employees,” said Britta Gross, director of GM advanced vehicle commercialization policy. “Once employees see how easy it is to plug in at home and work, and they realize the fuel savings, plug-in electric vehicles like the Chevy Volt begin to sell themselves.”

We could not agree more with her. It is encouraging that GM employees “want to be part of this positive change,” though more companies ought to follow the lead of General Motors even if demand is not as high as it is among GM workers. As Gross pointed out, the important thing is to “take the first step and make it simple for employees to engage.”

Workplace charging doesn’t have to be the more expensive Level II variety, as GM is coming around to the convincing case can be made for Level I chargers that cost far less and demand much less power. And it would be a worthy investment for forward-thinking companies, not to mention the resulting positive effect on the EV industry as a whole.

mike w wrote on May 29, 2014 - 6:41pm Permalink
35% of the docking stations are level I. Wow that is great. The vast majority of the "public" level I stations are really cheap say $3000 and can recharge 4 cars at a time. If your going to be at work for 8 or 9 hours than the level I would work fine and is way more cost effective than 4 level II docking ports..