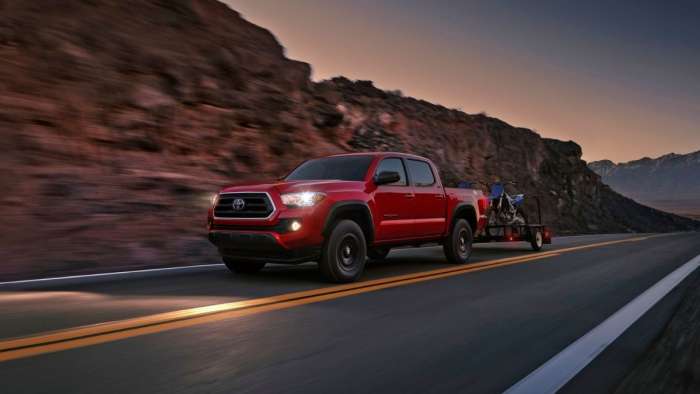 Your 2023 Toyota Tacoma Will Have New Color Options and Packages

Toyota just announced 2 new packages that will be available on the 2023 Toyota Tacoma. This new color will turn heads and drop jaws.
Advertisement

The 2022 Toyota Tacoma has been doing pretty well recently with sales. Unlike the RAV4s, the Tacoma doesn’t have an extremely high delivery or build time. The Tacoma has been known to be Toyota’s light pickup. Think of it as the Hilux’s American cousin. If you may remember, the ‘80s Hilux, known simply as the Toyota Pickup here in the states, was an extremely reliable truck that served its customers. As years progressed the “Hilux” became the Toyota Tacoma in the United States today.

Toyota released the SR5 SX and Chrome package for the 2023 Toyota Tacoma. These new trims will be available only for v6-powered SR5 models with either the Access Cab or the Double Cab in both 4x2 and 4x4 versions. Just like the Tundra SX, the Tacoma SX will include a lot of blacked-out body parts such as the over-fenders and blacked-out 16’ wheels instead of the stock ones. More black-like badging, mirrors, lug nuts, and graphics will also come with your SX. 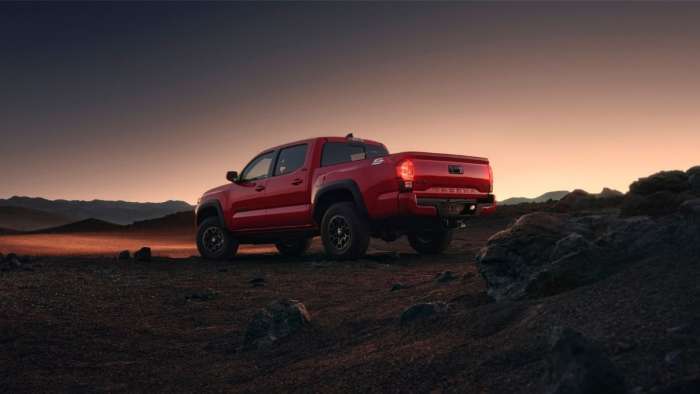 Toyota says they want these packages to be sort of like the everyday truck mods that you would do yourself except for much cheaper and under a warranty. If your DIY decal falls off, your warranty wouldn’t cover it but if your SX’s decal were to tarnish or fall off within warranty, you wouldn’t have to worry about doing it yourself. Some people say they are not fond of paying extra for mods they can do themselves, but I think why waste my time on simple things like badgehttps://pressroom.toyota.com/2023-toyota-tacoma-adds-new-sr5-sx-and-chrome-packages/ deletes or blacking out my badges when I can just pay a little more and make Toyota do it. This was also the case with the Tundra SX we covered yesterday.

The 2023 Toyota Tundra Chrome Package delivers more than just a little chrome. It is also only available on the SR5 v6 model with the Double Cab 5ft bed in either 4x2 or 4x4. This package gives you 18’ chrome alloy wheels with the classiness carrying on to chromed-out door handles. Your tailgate, exhaust tip, and leather shift knob also get the classical chrome treatment.

Of course, your Tacoma will still come with all the standard features you would get on your SR5 such as your Atkinson cycle engine, ECT-i transmission, D-4S Fuel injection system, Auto LSD, 4WDemand systems, etc.

However, these packages are strictly cosmetic and add no further performance or MPG change to your Tacoma. With these packages, you can also opt to get the new exclusive red color which Toyota calls, “Solar Octane.” Sounds like a luxury watch to me but you can see in the photos it looks incredibly nice.

If you really think about it, the default known colors for Tacoma are red or white. It’s like if someone says Ferrari, you think red. It is the same with Tacoma as well. I think this new darkish color will truly add value to the truck.

As standard, your Tacoma will also still come with all the safety features such as Safety Sense P, pre-collisions systems, pedestrian detection, DRCC, and lane assist with auto high beams. One thing I wish to see is the TRD Pro grill on the SX model as well. A lot of Toyota Tacoma owners buy aftermarket TRD Pro grills because the TOYOTA print on them just makes the truck look more mean and rugged. Online they aren’t any more than $250. The maximum I have seen was upwards of $800 which included its lighting and controls and such. However, the question here arises, who would really get the SX package?

That question is only answered depending on what type of owner you are. Are you the owner who gets in his or her car and doesn’t care what your car looks like? Or are you the owner who takes pride in his or her truck and gets mad when your kid spills his orange juice all over the fabric seats? If you are the second driver, this package is for you.

However, if you are the macho DIY man or woman who can do all of these mods without having second thoughts and don’t care about a budget, by all means, don’t get the package. While it includes some nice mods, it would be more expensive if you were to get the same things done at a professional auto shop.

What do you think? Does the Toyota Tacoma SX appeal to you? Would you do the mods yourself? Let us know in the comments below.