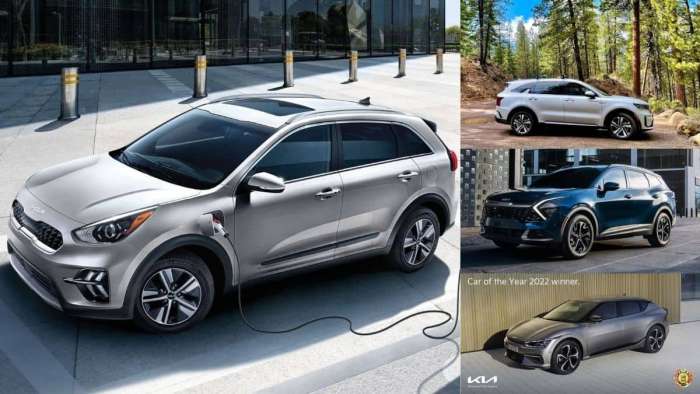 Kia just released their U.S. vehicle sales information for May 2022. While overall Kia sales were down in the U.S. for the month of May, as they are for year to date, Kia’s electrified vehicle sales were up, in some significant ways.
Advertisement

According to Kia, their U.S. electrified vehicle sales for May 2022 were up 132 percent over May 2021. While that number sounds spectacular, it is important to point out that Kia had fewer electrified models on sale in May in the U.S. last year (as the EV6 and Sorento plug-in hybrid were not yet on sale). It is also important to point out that compared to their all-time monthly sales record for electrified vehicles, set in March 2022, this May was only up by 5%. Also, overall Kia’s U.S. sales were down almost 28 percent for the month. While those stats may diminish some of the luster of this sales achievement, it is still a win for Kia and shows that they are managing to increase the availability of the hybrid (HEV), plug-in hybrid (PHEV) and full electric (EV) vehicles that are in ever increasing demand these days.

Which electrified models were driving this sales surge for Kia? Likely it was all of them! But it turns out that the Niro family of HEV, PHEV and EV models were the stars with its best ever May sales figures, up more than 28 percent for a total of 3,694 units sold, or about 42 percent higher year to date. In addition, the first full month of the all-new 2023 Sportage HEV saw an impressive 2,417 units sold and the EV6, which went on sale early this year, continued to sell well with 2,088 units sold in May and 10,001 total, year to date. Kia likely sold more than a few Sorento PHEV and HEV models as well, though these weren’t called out in their press release. That being the case, Kia likely sold about the same or less than in recent months since Kia would have called out higher sales if that were the case.

How did other mainstream manufacturers fare in their May sales, compared to Kia? Toyota’s sales were down about the same as Kia’s overall, at over 27% lower, however Toyota’s electrified vehicle sales haven’t been broken out yet so I’ll have to report back after they are. Mazda and Honda suffered far worse declines at over 63 and 57 percent, respectively. Subaru was down almost 25 percent and is on its 12 month in a row of sales declines. Ford fared better, and was only down a little over 4 percent. Perhaps more significantly, Ford has taken over second place from Kia in the EV sales race. It may be worth saying that is not necessarily the case in the electrified vehicle sales race, since Ford and Kia don’t break out all of their HEV and PHEV sales figures, and of course there’s Toyota and all its HEVs and PHEVs. Ford was able to snag the second place EV sales spot after the Mach-E had a record setting sales month (5,179 U.S. sales), and was further buoyed by 874 E-Transit work vans (also a record) and the first 201 sales of the brand new F-150 Lightning (technically a record too, since May was its first month of sales). In summary, it was a rough month for many mainstream automakers, but electrified vehicle sales (at least for some like Kia and Ford) were a bright spot with healthy increases in month over month and year over year sales figures.

It will be interesting to see if Ford retains its second place position throughout the remainder of the year. I think it is likely as long as the F-150 Lightning continues to at least steadily increase its monthly sales. Kia on the other hand will be debuting another PHEV later this year (the Sportage PHEV), but no additional EVs until next year (with the release of the EV9). Please leave any comments or questions below.