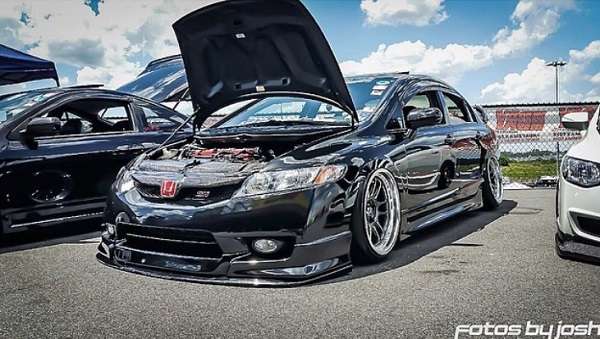 Hey, admittedly I’m an unabashed Honda performance fan. Thanks to Honda "Tuners" and the fans that enjoy what they do, hot Honda Civic Si street mania is alive and well in Miami. Here's one "Honda Fan-Boy's story.
Advertisement

I’ve lived it, I’ve written about it. Not too long ago a young enthusiast told me that the “Hot-Rod-Civic movement was dead. “You should have been here 10 years ago,” apparently he doesn’t live in Miami Beach, Florida.

As an automotive journalist covering Honda , Acura development, I’m afforded the opportunity to sit in the driver’s seat of anything new to the world of Honda. It’s my gig and I love it! However, as with most old wrenches you run into along the path, I too enjoy the simplicity of Honda Civic Si, and the “Tuner- Honda-Fanboys” that make them go fast. From time to time I’ll come across an exceptional car of beauty and performance balance; rolling art if you will.

Rasheed’s 2009 Civic Si is as cool as they come When I first spied this street performance 2009 Honda Si featured through the 8th Gen Civic Club, I was blown away by the subtle, yet stunning image of form meets function. It occurred to me that with a bit of time, imagination and a fist full of dollars, I too could realize the dream of street-performance, Honda style! That’s what’s so cool about Honda Civic Si performance, it’s doable.

Rasheed Qasem of Miami Beach Florida, a self professed “Honda Fanboy,” has owned 2 Civic Si in recent years. His first Civic Si was a 2000 year model, his current is an exceptional 2009 Civic Si-FA5 , slammed to the pavement, fat as they come, dressed in crystal pear black, chrome and polished aluminum. For Si fans, Rasheed’s ride is as good as it gets without having to refinance the house to build one. Rasheed tells Torque News that he bought his Si with 53,000 miles showing on the odometer prior to spending $16K or so in modification costs and countless install and detailing hours on this project.
His beautiful rolling Honda Art piece rides on airbags when not slammed to the pavement, has recorded 13.9 second ¼ mile runs at the dragstrip, and remains mechanically bulletproof, despite a 15% increase in horsepower, torque and a hard stomp on the throttle, a time or two.

Rasheed has a plan or two for his Civic Si With a feature in mind as a professional “Tuner,” young Rasheed has a modification plan or two in mind for 2019 Civic Si. Turbocharging? He’s not saying. However, from what we can tell by reading Rasheed’s parts list, this Si will just about handle any race modification one could throw at it. Thanks to builders like Rasheed Qaseem, hot Honda Civic Si street mania is alive and well in Miami Beach, Fl. Well done Rasheed, keep winning shows young bro! Torque News-Honda looks forward to following your current and future Si projects for years to come. Thanks goes out to " Fotos By Josh." for these epic pics of Rasheed's ride.