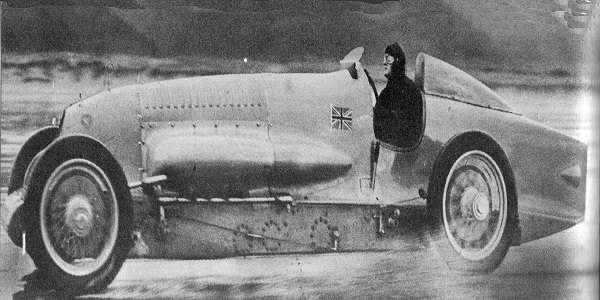 88 years in the making, is this a publicity stunt?
Perhaps, but for us, the real story here is the fact that it took a $234,000 Bentley “Continental G.T. Speed” to beak an automotive racing record set in 1927 with the 88 year old technology of the day or did it? Let’s take a look at Campbell’s “Napier Campbell Blue Bird” Steamliner.

Back in the early days of automotive racing and subsequent attempts at setting land speed records, Sir Malcolm Campbell of Great Britain was a superstar of the “Golden Age” of automotive development and beyond.

Magnificent Men in their flying machines

The “Supercars” of that era most often utilized engine and driveline technologies lifted from the military aircraft development of the early 1910s and 1920s. In the Case of Campbell’s record holding 1927 “Napier Campbell Blue Bird,” the open wheeled, open cockpit aluminum bodied streamliner was powered by a mechanical twin-cam 500 horsepower W-12 (3 x4 cylinder bank) normally aspirated Napier Aviation engine; one if not the most powerful internal combustion aviation engine of the day.

We find no details on the transmission and differential, but know without a doubt that it was mechanical, planetary and double-clutched-clunky. Looking to the original photo of the “1927 Napier Campbell Blue Bird" racer pictured above, the proportions of the streamliner was dictated by the design integration and housing of the massive 12 cylinder aircraft engine.

The monster was stopped with mechanical drum brakes of astounding proportions, and often questionable stopping capability at high speeds. Our guess is that the streamliner took no less than 1,000 ft. to come to a full stop from 180 mph.

What happened to Sir Malcolm?

Although Campbell’s “Blue Bird” would achieve a top speed of 195 mph, in those days(as today) the “Flying Mile” speed record is the recorded (average) speed of two runs on the sand flat in opposite directions; conducted on a clocked I mile stretch of hard packed sand. During his life time, Sir Malcom Campbell would roll on to set numerous land and water speed records prior to his Jet Hydroplane accidental death of 1967.

According to the Los Angeles Times, in regards to the Elba-Bentley run: The actor averaged 180.36 over the course of a mile in a Continental GT Speed, busting automotive journalist Malcolm Campbell's 174.8 mph record set in 1927. And Campbell was in a race car at the time, not a two-door, 626-hp coupe without modifications.

The record breaking feat was attempted as part of an upcoming four-part Discovery Channel series, "Idris Elba: No Limits," in which the car aficionado will take on different competitive speed challenges, according to the Discovery Channel.

So, while we’re just a bit jealous of Idris Elba’s life style, we don’t see his driving a production Bentley “Continental G.T. Speed” to 1927 speed records much of an accomplishment.

Although,180 mph is flat out flying down the flats of Pendine Sands, even by today's performance standards, we find a bit of fascinating irony in this story that is 88 years in the making. The fact that men were driving automobiles capable of 200 mph nearly 90 years ago is quite astounding, considering the fact that much of the world was horse and buggy driven at time. Iron men, iron balls. And on a side note: Today's supercars employ aeronautic engineering in their development as recently shared by Acura Division. As much as the world changes...

2015 Bentley Continental G.T. Speed. Our thanks To Bloomberg Press.