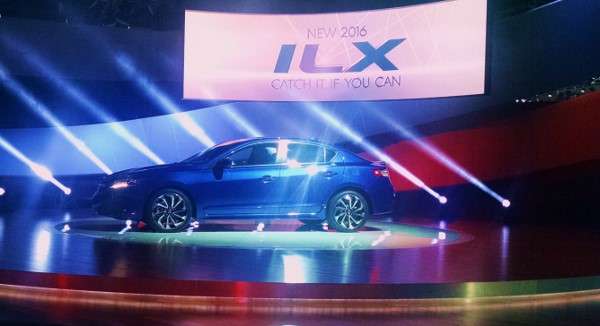 Just 3 years into a successful production run, Acura goes back to the design room with 2016 ILX for what they refer to as a significant refresh. ILX may just be the perfect commuter-sports-sedan-compromised.
Advertisement

Will changes to ILX drive compact sports-sedan car performance to the next level?
That’s one of the questions that comes to mind when viewing Acura’s mid-cycle “refreshed” ILX. Sitting front row center at the Acura Stage, 2014 Los Angeles Auto Show has it’s advantages and disadvantages. The advantage is that you’re surrounded by the world automotive press at the unveiling of yet another exceptional Acura offering. It’s show time baby, and Acura is second to none in presenting a first class show with Hollywood undertones.

The excitement and anticipation of the crowd is palatable

As Jerry Seinfeld stated when interviewed after Acura’s NSX reveal in Detroit, ‘He’d never seen a car presented in this manor,’ or something to that effect. Honda and the Acura public relations machine is second to none in pushing and building on the momentum of public anticipation when presenting a new car. That momentum of anticipatory generated excitement brings buyers to the showroom.

I liked what I saw when 2016 ILX was driven onto the stage. How much of that “like” is generated through the lighting and sound effects, down to the fog mist creeping its way across the stage? I have no idea. You see, that’s the downside of attending a major auto show reveal. The distraction goes way beyond the walk through of hundreds of competing brands, designs and new technologies. The real danger for an auto journalist is falling into the trap of a car “just being another car.”

We all have to deal with it when conducting a drive review, or simply reporting the release of a new offering. The seemingly insurmountable mountain of choice offered to a consumer on any given year in the North American auto market can be staggering. To succeed, and I mean really succeed, an auto manufacturer must first anticipate the future forward needs and wants of a wide demographic of buyer’s while measuring with certainty the design direction as ground breaking technologies offered by the competition, and, at what price-point the market will carry while packaging those technologies.

Acura has found a winner in TLX, will ILX be Acura’s next big success?

I wasn't shy as to being the first journalist at the Los Angeles Auto show to sit in the driver’s seat of ILX. Torque News had written earlier reviews on 2015 ILX, a good car, but not necessarily a game changer. 17,854 ILX models sold in 2014, down 12.6% for the year. What would Acura engineering and interior design have to do to the company’s second best selling sedan to take it to the next level? As ILX rolled onto the stage, you could smell Audi and BMW in the room measuring the press corp’s response to the refreshed ILX. The room broke into applause.

The first place I sit when entering a new car is in the driver’s seat. If the seat doesn’t fit, I walk away. After All, spending the next 2 to 6 years in an iffy seat doesn’t make much if any sense; Acura knows this.

For 2016, ILX is equipped with a form fitting, leather surfaced 8 way power adjusted seat. The side bolsters are not overly aggressive. Leg room is within a fraction of an inch of TLX, Headroom, a bit higher.The ergonomic layout of all controls is within short reach of the operator, is intuitive, people-connected and well balanced.

Although rated as a compact in the size department, ILX doesn’t read small when residing within it’s seemingly spacious confines. It’s that crazy mind-meld thing that Honda does so well. Space continuum? Take a look at Fit, you’ll know what I’m talking about. The same is true for ILX. Small on the outside, big on the inside, for a compact anyway.

Looking to the refreshed exterior, 2016 ILX retains the Civic proportions while building on the organic, hard-line body design compilation that is TLX. You can see shades of TLX in ILX, however, Acura has done a stellar job here in preserving the BMW 3 Series slayers personal identity. Arguably a good looking car for 2015, Acura will carry the mark forward with an interior and exterior “A-Spec” trim package, featuring a premium sound deadening wheel package, lower body cowling, trunk down wing,(sort of) and an Si like snout cowling with fog lamps.

Sweet! What about the engine and transmission

Acura’s taking a very bold step with ILX. We haven't seen this move in a car design in decades. First of all, let’s get it out of the way. There will not be a hybrid offering for 2016. with fuel prices plummeting and 2015 Accord Hybrid selling well, it makes no financial sense for Acura ILX Hybrid.

With that said: According to our contacts at Acura, there will be but one engine and transmission combination offered in the 2016 ILX. You won’t have the option of P-AWS or SH-AWD in Acura’s portal car, and that’s a good thing. By keeping ILX relatively simple, Acura can kick up the horsepower and torque, upgrade the transmission, improve braking and handling through improved frame rigidity and reduced dead-weight while holding the price-point.

2016 Acura ILX will be equipped in all trim levels with a 2.4 Liter 4 cylinder “Earth Dreams” direct injected i-VTEC gasoline engine producing 201 horsepower @ 7,000 rpm and 180 ft-lbs torque @4300 rpm, sent to a limited slip differential via an 8 speed dual clutch transmission as found in *TLX i-4. We’ve driven it, we love it!

So what we have here in ILX is a compact sport sedan refined and comfortable enough for your daily commute. The icing on the cake is the TLX engine and transmission shoehorned into a car weighing 500 lbs less than TLX. The power to weight ratio is impressive, as is the predicted price and fuel economy. If Acura follows suite, a well equipped 2016 ILX should price somewhere below the $30,000 mark.

Torque News looks to the “Earth Dreams” engine and state of the art 8 speed transmission to increase fuel economy by 8% in the city and 10% on the highway in Economy mode. Slight improvements in fuel economy won’t make or break ILX, an exciting car by any measurement.

mike wrote on February 1, 2015 - 1:45pm Permalink
Thans for the story. But please stop with Acura feels european quality. The only european cars actualy in such category whic has a really good quality is the Mercedes C class. The other european cars in such category are not as good as this Acura or the actual Lexus IS. Sit in a BMW and look in detail into the assembling quality and compare it with the Acura and Lexus IS or even the Infinity (we have the Infinity dealers actualy in Switzerland). Even the new Audi A4 is not as good as mentioned. And even in the Benz C classe you can find enough assembling issues. Yes the Acura, the Lexus IS have a better inside quality than my wife's Bmw 335 2014. Analyse both honestly in detail and you will see.
Parks McCants wrote on February 5, 2015 - 11:54am Permalink
Good day Mike. It's actually the manufacturer that compares Acura to Audi,BMW, etc. I agree with you. Acura's over-all qulity is superior. Thanks for your comment.
Parks McCants wrote on February 5, 2015 - 11:55am Permalink
Full specifications, pricing and dealership availability will be released on 2016 ILX, Monday. Thanks.