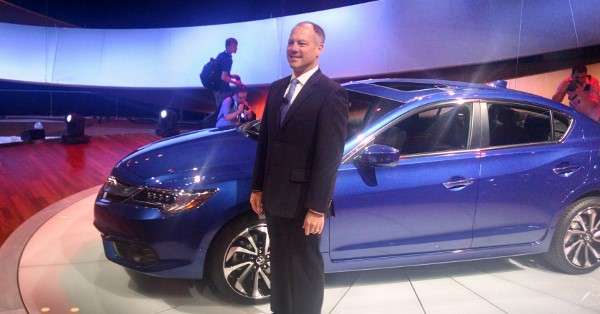 TLX influenced and much upgraded 2016 ILX will jump on the wave of Acura popularity resurgence with ‘born to be wild’ styling and performance. It’s Acura’s next big hit.
Advertisement

Acura’s ringmaster and GM Michael Accavitti is second to none when it comes to spreading contagious sensation spun accolades. He’s perhaps one of if not the most effective live speaker in the automotive world today. 2016 Acura ILX has Michael Accavitti tongue tied, it’s that good.

Thursday morning found Mike standing in front of a packed world press audience, center stage of Acura’s state of the art multimedia display at the Los Angeles Auto Show. It was show time for Acura’s much-refreshed 2016 ILX, I was skeptical.

How would Acura take arguable an already good entry-level executive sedan and make it great? I’d reported on a too-Civic like ILX last week, and with the drive experience enabling a restless night’s sleep or two, I headed off to the West’s largest auto show. Although I’d accurately predicted the 2016 Acura ILX directive here, I lingered in a state of reluctant trepidation in contemplation of Acura’s next big thing.

2015 Acura ILX is arguably good looking but lacking in smack-down styling and performance. In a recent test drive I reflect on the positive and negative Civic-like attributes of ILX. After All, Acura ILX competes with the likes of Audi A3, BMW 3 Series Mercedes Class and others in perhaps the fastest growing(sedan) segment in automotive today.

There was a paradigm shift in the compact executive sedan class Thursday morning in Los Angeles. without reservation I report to you that a mostly jaded group of auto aficionados, executives and article spinners were captured by Acura’s audible and visual center ring production.

As the lights dimmed, fog was pumped onto the stage to copious amounts of thunder inundated soundtrack, two 2016 Acura ILX were driven onto the carousel. The automotive world took note as the industry was once again given notice by Acura; they would return to segment prominence with yet another affordable, value packed offering.

A bit of TLX performance injection for 2016 ILX, BMW can’t touch this

I caught myself verbally expounding old English expletives as the lights came up. Acura engineering had accomplished in a few months what would consume years for many makers.

By injecting a bit of TLX inspired exterior styling and performance, Acura ILX has been elevated to world-class compact executive performance sedan standards and your serious consideration.
As I walked up to the stage and congratulated Mike Accavitti and Acura on yet another ground breaking manifestation well done, the crowd’s excitement was palpable. Stunningly dressed in a one-off custom shade shifting blue, ILX joined the ranks of Europe and Asia's best offerings.

It’s that time- space continuum thing that Honda and Acura does so well. On first seating it smacked me in the side of the head like a loose fly-ball at Dodger Stadium, no one in the segment will offer the combination of fit and finish, interior ergonomic-comfort, personal connectivity, visual appeal, power and performance found standard in 2016 Acura ILX. If priced as predicted(27,900- $32,500) ILX will represent the greatest overall drive and ownership value in its segment.

Brilliant marketing and execution: One engine and drive-train standard across the line

For 2016 Acura ILX will feature a 2.4 liter i-VTEC and state of the art dual clutched(automatic) 8 speed manual transmission as found in TLX, standard across all trim levels. Ride dampening has been improved for lower road vibration transference. Sound deadening and body rigidity has been increased for a smoother quieter ride with performance and fuel economy approaching best in class.

Wrap your mind around a car the size of a 2015 Honda Civic with the styling and performance characteristics of Acura’s best selling TLX; that’s ILX for 2016. Offering exceptional performance-handling characteristics and tech-enabled connectivity and safety features, ILX represents not only Acura’s return to prominence if not a dominant position in the compact executive sedan class but a paradigm shift in performance luxury, Acura style.

I look for 2016 Acura ILX to be Acura's next record breaking success story..