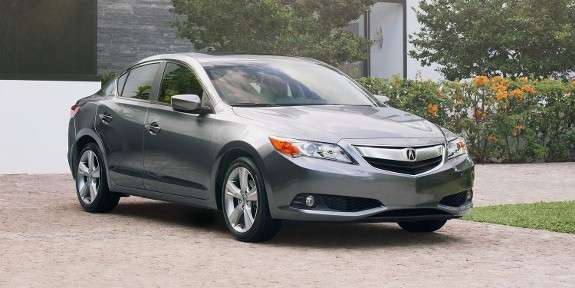 With Acura’s Monday announcement of yet another consumer award for the entry level ILX, we take a look at the competition. Surprisingly enough, the Civic Si Sedan is sitting in the middle of the pack.
Advertisement

The compact luxury sports sedan is a curious commodity. The sector isn’t as vast or populated as it was in years past with domestic entries all but eliminated by the great recession.

While we may look to Mazda, Toyota and Volkswagen for what most consider to be high quality compact sedans, when Acura performs an online comparison of the ILX to the competition, they look to Buick, Mercedes Benz and Audi A3.

Surprisingly , you can purchase a base priced Audi A3 for a mere $700 more than a fully loaded ILX. The same is true for the Mercedes CLA 250, all high output OHC 4 cylinder runabouts with major brand names and standard accouterments knocking on luxury's door.. Where the ILX takes the field is in its fully dressed and highly loaded tech-driven manifestation.

This compact Acura truly shines when comparing the car ‘apples to apples’ with the competition. The value added Acura ILX beats the competition by coming off the retail lot for $5,000 to $6,000 below a comparably equipped competitor. There may be one exception.

And that’s where a fully loaded Honda Civic Si comes into the picture. That’s correct, the Acura ILX is Honda Civic sized, shares some of the same components and attributes of its lower classed brother. And, while the Si doesn't carry the Acura label, looking at the cars side by side, the similarities are uncanny.

While the Acura ILX’s interior may be a step up in passenger accommodation and finish, trim refinement, one must go to the the ILX 6 speed manual transmission with communication package to approach to performance of Honda’s Civic Si. And even then, the ILX falls a few ponies short of the Si’s 205 horsepower.

However, Acura has done a commendable job at bringing in the ILX’s weight at 24 lbs lighter than the Si’s.

Looking to the numbers: A fully loaded Acura ILX with close ratio 6 speed transmission and premium interior package has a suggested list price of $29,200 + tax and destination charges. A comparably equipped Civic Si will set you back $24,490. While the Si doesn’t offer leather seating areas and eight position power and heated seats, $ 5K will buy a lot of fuel and auto insurance. Both cars hold the highest residual resale value in their respective segments.

For us, it comes down to personal preference with a dash of budget, while weighing the noted prestige of the Acura label. Both cars come standard with long lasting Honda quality.