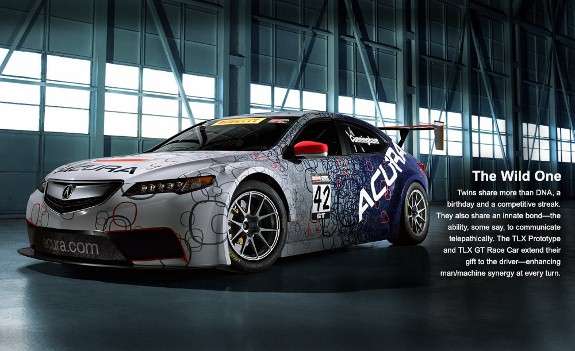 According to RealTime Racing’s Peter Cunningham, Acura has won more races and more manufacture championships than any other manufacturer in Pirelli World Champion Series racing. He should know, he’s the winningest driver in his class.
Advertisement

Last month, we covered RealTime’s transition into the top class of Pirelli World Champion Series racing in an article written on the 2014 Acura TLX GT. The response to the pending TLX has been bordering on giddy.

Some readers may find Acura’s participation in the racing world to be counter to much of the luxury mark’s product line. After All, the best selling cars in the line are not cars at all, they are classified as light trucks.

For Acura, quality, precision of manufacturing and tech-driven sports performance, translates directly to a no- nonsense approach to earned status. And for some, a sense of obtainable, well deserved quality. Acura’s thing is not ostentatious opulence.

Acura hopes to return to prominence if not dominance in the mid size luxury sport segment with the introduction of the 2015 TLX mid year 2014.

When asked why Acura races, Peter Cunningham points to the same reasoning Cadillac, Chevrolet, and Porsche team owners will share with you. Acura races to promote the civilian variant of the cars competing in the W.C.S. race series.

Winning cars promote public interest in the brand while generating subsequent sales. Racing at this level is the highest form of effective automotive brand advertising.

Cunningham shares with us that while his race car is modified a bit, the car does share a large percentage of attributions with the factory doner car.

For Honda HPD, racing is the highest form of R&D and bench testing. Honda is the leading engine manufacture on the planet.

While you won’t find HPD’s 3.5 liter direct injected twin turbocharged V6 in your next Acura Sedan, you will discover a very competitive, well priced all wheel drive sports sedan poised to take on the daily commute. In the meantime, we'll let Peter explain the difference between his race car and your street Acura.