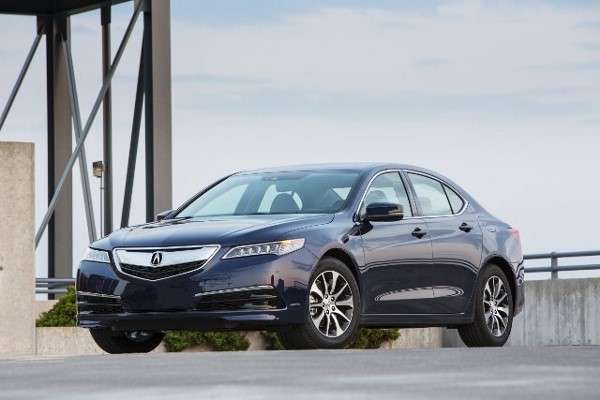 Entry level 2015 Acura TLX retains the fun driving aspect of the outgoing 4 cylinder TSX while capturing the interior dimensions and polish of the TL. We believe that the 4 cylinder TLX will be the best selling midsize luxury sport sedan in Acura’s lineup.
Advertisement

Chuck Schifsky of Honda public relations asked, ‘if we were to give you a 2015 TLX, what car would you take?’ After doing a double take, I found myself scrambling for an answer as 300 miles of road testing clicked through the back roads of my mind. Not an easy question to answer, the entry level TLX brought back memories of Acura's Integra Type-R, we liked the car.

Surprisingly enough, after driving the fully loaded 3.5 V6 SH-AWD TLX with tech package, I found myself gravitating toward the simplicity and measurable sportiness of the normally aspirated 2.4 liter 1-VTEC DOHC 4 cylinder FWD. Coupled to Honda engineering development's(Japan) newly crafted dual clutched 8 speed, this car gave BMW a run for the money; I like BMW.

The thing is, Acura TLX smoked BMW 328i in cabin comfort, quiet, overall handling and ride performance. Yeh, I know, BMW is BMW. To double check my possible preconceived affection for the all new TLX, I took the wheel of a 2014 328I x-Drive Sedan.

While the 328i's turbocharged 2.0L 4 cylinder was impressive(V8 impressive,) I couldn't shake the TLX experience, me and co-driver Bean were hooked on the total package. Acura refers to this as the “3 P’s,” Proportion, Prestige and Performance. And, while all TLX variants hit the nail on the head, the 4 cylinder TLX returns Acura fans to the rev-happy days of the Acura Integra and Honda Type R. While Acura TLX was shy a few ponies of the BMW turbo 4, I soon came to learn that it didn't need it.

In an era of the “downsized supersize,” Acura has created a very attainable yet measurably rewarding ownership and driving experience. with a beginning MSRP of $30,995, TLX arrives in its barest variant, a well equipped driving machine.

While we've all read Acura haters downplay the styling aspects of the TLX, the car in person is stunning. This year Acura has come up with several new colors, complimenting and contrasting interior combinations.

On first visual the TLX design incorporates TL flavor and body line while pulling the car closer to the ground. Acura claims class leading aerodynamics. This car is slippery, yet cautiously cutting edge. pure Acura. Acura has retained the historic grin as well as the diminutive trunk fin while flawlessly integrating head and tail lighting into the body line. Just enough chrome has been integrated into the greenhouse to catch one’s eye.

Take a close look at the the side profile of the TLX, you'll see the work of a state of the art pannel bender developed specifically for the TLX. While I didn’t have a micrometer in hand, I will state with conviction that the panel fitment on this car is very near hand-built perfect.

This is where TLX takes on Type R performance traits.( Are you smiling yet?) The weight of the FWD TLX(3492 lb with Tech) remains the same as the outgoing,smaller TSX. And yet Acura has increased the interior volume of the new ride while improving the comfort of the seats(nice) and rear seat legroom.

Taking an engineering trick or two from Honda Racing and Motorsports development, Honda engineering(Japan) has followed the lead of Ferrari, Lamborghini Porsche, Mercedes in race applications and placed a DCT in the chassis of a $30,000 Acura. Actually, Acura has improved the DCT by developing the world’s first 8 speed DCT with a torque converter. By doing so, TLX provides a 33% faster shift than a 5 speed automatic transmission, it’s impressive.

I can’t say enough about the performance aspects of Acura’s dual clutch 8- speed. In sport mode you’d be be hard pressed to outshift this computerized marvel. To say that this car’s performance is intuitive is a Grand Canyon sized understatement.

Crisp and exacting upshifts and downshifts with the 8 speed TLX is effortless. When placed in Sport +, the 4 mode IDS( Integrated Dynamics System) gives the driver split second control of this high revving( 6700 rpm Rev Limiter) twincam 4. When left in Sport , the TLX will resume from a stop in 1rst gear. The driver must utilize the steering wheel mounted paddle shifter to up or downshift. In Sport+ the 8 speed becomes a close ratio 6 speed. Switching back and forth between modes is seamless.

Left in regular or sport mode, the computer takes the 8 speed through its paces flawlessly. The torque converter insures drive smoothness rivaling the best automatic transmissions on the market today. On a downhill the TLX shifts down into bank turns and upshifts through acceleration, it holds a hill as well as a manual transmission. In Econ mode TLX takes on the personality of a well dressed Accord LX. Acura claims 35 mpg on the highway, we found no reason on the test drive to discredit this claim.You may read full specifications here.

Exiting the 290 hp Acura SH-AWD only minutes earlier, we found no disparity in power and handling characteristics experienced while driving the entry level TLX i-4.

While the TLX V6 SH-AWD may be measurable quieter in the interior of the car, the sport exhaust note of the high revving 4 cylinder made this issue a mute one. Note: In normal drive mode while highway cruising, the interior noise level of the TLX i-4 is comparable to the V6 variant. By increasing frame rigidity, filling hollow frame cavities with sound foam while reducing deadweight and changing tire rubber compounds, Acura has achieved world-class quiet throughout the TLX line up. We did note a bit more trailing rear axle tire bounce in the FWD 4 cylinder, it was negligible.

The entry level TLX i-4 comes standard with state of the art all wheel steering, pretty cool stuff. When in a slow turn the rear wheels of TLX turn in the opposite direction of the front, thus slightly reducing the length of the cars track. At higher speeds the rear wheel turn in unison with the front of the car reducing frictional scuffing. The result is a quicker sweep, or when needed, a help with braking in a downhill sweep. love it.

Do you notice or hear the systems working in the TLX?

We've been asked by readers of Torque News about the finer workings of the TLX, We state the following: Acura has eliminated the drive-by wire- acceleration lag experienced in earlier generation Acura and Honda vehicles. We noted zero acceleration lag, brake fading, transmission glitch, torque steer or excessive engine vibration in TLX. The systems work seamlessly. I personally prefer a console mounted stick to the button drive modes found in the TLX V6 P-AWS and SH-AWD. The TLX-i-4 has a stick, I like it.

Yes, the entry level TLX features current generation personal connectivity as well as state of the art accident accident avoidance. You can read about it here.

In closing: I believe that TLX 1-4 brings Acura back to the heyday of the Acura Integra Type R. While that may be a bold statement, we suggest that before you test drive TLX, take the competition for a spin, look at the the $ bottom line and head over to Acura, arguable the best overall value in an economy driven sport sedan.