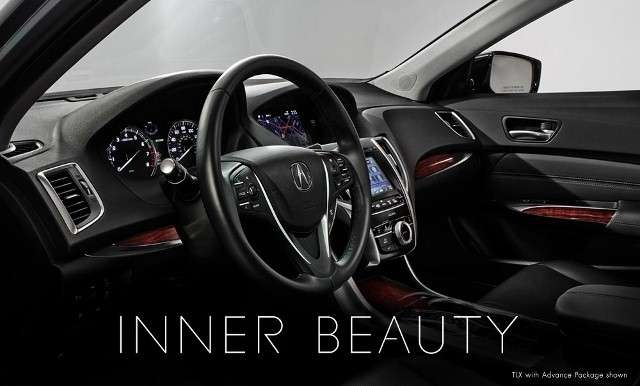 In a recent 280 mile real road conditions driving trial through the wine country of West Virginia, we determined that Acura’s latest offering has a measurable advantage over BMW, Lexus and Infiniti in handling and superior ergonomics driven comfort.
Advertisement

In fact, Acura TLX will change the way that you measure automotive performance.

While that’s a bold statement for any auto reviewer to make, we believe that after comparing BMW 328 i X-Drive, Infinity Q50 and Lexus IS 250 to the all new TLX, Acura’s newest offering is the winner in several categories.

2015 Acura TLX is more than a bit impressive in its handling. To date, we’ve yet to drive a stickier entry or mid level premium sport sedan. Offered in 7 models, all standard with superior handling, through (P-AWS) all wheel steering or SH-AWD, new direct injected engine designs, 8 and 9 speed transmissions. Acura has increased performance while improving fuel economy. Granted, BMW, Infiniti and Lexus performed well in most categories, TLX was superior in road control and interior ergonomics. TLX possesses what we’ll refer to as “Flatitude.” While driving TLX, one is in total command of the car and the road of the road.

TLX brings to the mid priced premium sport sedan class( base msrp $30,995.) what had previously been reserved for cars costing twice as much. The road stability and driver-wheel connectivity of this car is impressive. One can truly feel the road through the very smart electric asist rack and pinion linked steering wheel.Fit and finish is impressive, interior space and ergonomics, superior.

Acura engineering has increased the flex rigidity of the frame, crumple zone, added sound deadening to previously hollow body members while increasing suspension dampening and road noise isolation. They’ve put the development time and cost in the TLX where it most matters, where the tires meet the road. We were duly impressed by the rigidity, quiet and cabin comfort of the TLX.

Acura has reinstated the “door thunk” in the TLX. First impression is one of quality. TLX is measurably superior to the competition in road-bounce recovery, downhill nose dive, braking and acceleration recovery. It swoops out of a turns without noticeable side sway. Suspension dampening eliminates squirreliness, while reducing body mass rebound. Brake fade? none.

We discover that In the 3.5 liter SH-AWD premium sports sedan, Acura engineering has all but eliminated the negative torque steer often associated with front wheel drive. We noted zero torque pull to the right on take off. This is a big deal for drivers that prefer the performance attributes of a rear live axle. In the TLX the difference between the two is negligible.

Acura SH-AWD sends torque transference to the wheel where it’s most needed. Torque sent to a specific wheel in an accelerated turn or down hill effectively aids in the car's steering geometry, bringing the TLX quicker into a turn or exiting a turn on excelleration. You can watch the car do so via dash monitor. However, you won’t sense the change while driving, it's seamless.

For the front wheel drive 2.4L 4 cylinder 8 speed TLX and FWD V6 9 speed, Acura calls on all wheel steering to effectively emulate some properties of the SH-AWD while holding the line on fuel efficiency, MSRP and weight. Both systems challenge the competition for superiority in road handling.

We couldn’t agree more, from where we sat, this car’s interior noise level is a bit unsettlingly quiet, you can hear your own heart beat.
In-fact, other than a barely detectable intermittent rear tire bump (very rough roads) and minor mirror wind noise; there was none. Speaking at a low decibel in the TLX is effortless.

Handling attitude of the TLX is a flat plane trajectory. We launched the test car several times(oops) on the backroads of West Virginia. We noted zero brake and shock fade. When pulling the TLX through several “S” turns under heavy braking and follow through acceleration, the TLX in all variants performed flawlessly.

We're blown away by the interior cabin volume exhibited by the TLX. Once again Acura and Honda engineering has manifested a superior ergonomic dictated driver placement and passenger seating that logic dictates would not fit within the confines of the TLX.

The seats are exceptionally comfortable. Acura has removed the hard hip bolstering while retaining seating position control and grip. After 6 hours of pushing the TLX through its paces, this reviewer walked away unusually refreshed. The TLX SH-AWD V6 with advanced package(base msrp $42,500.) comes standard with a 10 way adjustable, heated driver’s seat, the passenger gets 8.

Leg, shoulder and hip room is more than ample for this 6’ 5” reporter. Yet, adjusted with ease and comfort for our 5’8” co-driver. Visibility afforded from the cab is superior, controls, gauge and touch screen monitor is well placed with one exception.

We found the positioning of the drive mode toggle(IDS) to be less than intuitive, thus a bit distracting and clumsy. Offering four drive modes, the IDS toggle is positioned below the drive button on the center shift console. locating the toggle while driving requires a shift of the eye off of the road. We believe that the driving mode selector should be placed on the wheel, or voice activated.

In segment #2 of our Torque News review, we’ll cover the engine, drive train and electronics of the all new 2015 Acura TLX. Keep posted and thank you.

John Goreham wrote on August 4, 2014 - 8:04pm Permalink
I think a lot of people underestimate just how good, and just how fast, the Acura V6 sedan can be. I'd say the same for the Accord V6, particularly the Coupe manual.
William Cervini wrote on August 4, 2014 - 10:33pm Permalink
This sounds like PR piece by Acura. Where is the '' measurable " data? It is one man's opinion with no facts to back it up.
Parks McCants wrote on August 5, 2014 - 1:26am Permalink
Well William, as noted in the last paragraph of the article. Look for part 2, Tuesday. Thanks.
Adrian wrote on January 18, 2015 - 9:13pm Permalink
Test drive it yourself? good option to make lol
Geek wrote on August 17, 2014 - 10:47pm Permalink
I agree that the Acura is well designed, smooth and quiet with an interior that you would expect in an up market car. The dual screens is unconventional, not bad but unusual. The push button transmission is to me more acceptable than the electronic gear shits in others. The drive is solid with DNA that is different than BMW or Mercedes, not a bad thing but just different when comparing cars. The car in some respects reminds me of the SAAB 9-5 again not a bad thing, understated and excellent. I never understood the Acura front end and glad they toned that down. In short the TLX is in my opinion a major improvement over prior models. I did not think we would seriously consider a Acura but we now are but we are.
Dany wrote on August 4, 2016 - 7:33pm Permalink
Driver Acura's since 1998 Acura CL, in 2000 I got update to new Acura CL-S 150K had a transmission issues but all repaired and covered by Acura, 2006 Acura TL drove 60K miles no issue ,only oil change that's it! 2012 TSX 70K miles only oil change! Acura TLX beats expectation . V6 35MpG, 0-60 ,5.5 sec. Amazing cornering ,braking, acceleration, sound system like a life orchestra, wish to see a rear muffler pipes as on previous models, but this is not an issue. Price is affordable and car is reliable.
Parks McCants wrote on August 4, 2016 - 9:38pm Permalink
Welcome Dany. Agreed! Thanks for dropping in.