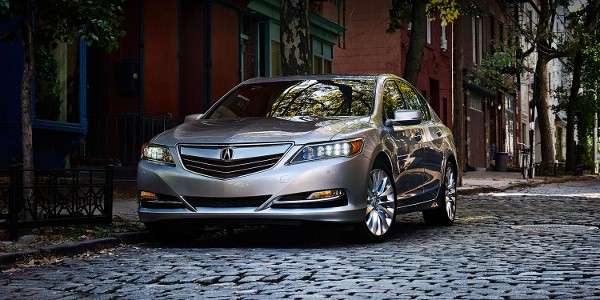 In a world of truly “smart” cars, 2015 Acura RLX V6 P-AWS with Advance Package outsmarts the competition. Question: Do we want or require this much high-tech from Acura?
Advertisement

On our first drive of the Acura 2015 RLX, we're reminded that new or updated electronic features remain the last sometimes subtle difference in competing automotive brands and models. Such is the case with Acura RLX. Without the Advance Package, RLX would simply be a finely crafted, limited production Japanese luxury Sedan. As previously stated by Torque News, the fit and finish of RLX is unquestionably top notch, as is the interior spacious accommodations and subsequent comfort. RLX sits at the top of class in this category.

None the less, RLX in its current generation is presented in non SH-AWD Hybrid trim, remains a front wheel drive car, while the majority of competing brands in the sector feature rear wheel or all-wheel drive systems; some with higher output engines and hybrid drive systems

From our experience, many luxury car drivers don’t like the torque pull inherent to front wheel drive. Acura has done a commendable job of removing this characteristic through AWD, RLX doesn’t have it. Acura RLX out techs and out comforts Mercedes E Class, but does that make it the greater driving- ownership value?

Historically, luxury car buyers have reached for the ever evolving Cadillac and Lincoln domestic offerings, Audi, BMW, Infiniti, Jaguar Lexus and Mercedes Benz. Those that don't wish to purchase a premium or luxury sedan often opt for a premium SUV. Acura's MDX is the best selling premium 3 row SUV in North America.

The majority of the aforementioned brands hammered Acura sales during the great recession and early post recession years. The reasons for this are too many to address here. From what we can discern it’s not price point nor is it (in most instances) performance.

When Acura entered North American markets in the 1980s, they dominated the competition for the better part of a decade. Acura was Honda’s premium Japanese built brand, priced right and fun to drive. Shortly,the competition stepped up to the task of improving manufacturing standards, fuel economy, cabin space and comfort. Acura encountered a handful of innovative model releases that were not accepted by North American buyers, Acura sales plummeted.

Today we find Acura standing on the precipice of a “branded” rebirth. RLX is not the car slated to take Acura back to its glory years, TLX is, and that’s where we get a bit lost with the review of the 2015 RLX with P-AWS and Advanced Package. In researching the attributes of RLX, we discover a little in-house competition.

Comparing apples to oranges, Acura has an internal marketing problem. Until the 2015 RLX Hybrid with SH-AWD is released to North American buyers, TLX is the better driving value.

SH-AWD removes the launch torque transfer inherent to all front wheel drive cars, with this feature, RLX would be a total pleasure to drive. While driving on the freeways of Marin County we were impressed by the overall power, road feel and comfort of RLX.

Where we noticed the absence of SH-AWD was while driving aggressively on city streets, coming off of a stop light or turning in and out of a driveway. Believe me, RLX is in its current trim delivers impressive acceleration. Braking and lane change control via P-AWS is impressive. But, in an Acura that breaks the $60,000 price point, luxury buyers expect exceptional performance, comfort and quality for their dollar spent.

Looking to the numbers

RLX is the largest sedan in Acura’s lineup. Weighing in at 3997 lbs in Advanced Package trim, RLX is 249 lbs heavier than the 2015 TLX V6 with SH-AWD and premium tech package.

3.5 Liter direct injected SOHC i-VTEC V6 delivering 310 horsepower and 271 lb-ft torque @ 4500 rpm. Note: We found the torque delivery via Acura’s 6 speed automatic to be seamless and on tap at will. RLX is surprisingly nimble and powerful for a luxury sport sedan of it’s class.

EPA-MPG is stated at 20/31/24. While this is not record breaking in the segment, we find it to be reasonable for a car of this caliber and accommodation, this thing is fully loaded. You may take a closer look at the accessories and specifications here.

While a comparably equipped TLX(many features do not overlap) has a fully loaded MSRP of $44,700, $16,000 less than the top of the mark RLX, TLX does not carry the social weight(status) of RLX. Nor does TLX afford rear seat passengers the comfort of RLX. It’s a personal thing, what do you demand from your next premium or luxury 4 door sedan?

For 2015 Acura RLX takes accident prevention, driving stability, touch screen and voice controlled connectivity to the next level. We found that next generation Acuralink, voice actuated GPS, GPS linked climate control, LaneWatch and other Honda technology wonders to be mostly intuitive. However, we advise spending a few hours becoming familiar with your Acura owners manual. We discover a learning curb to finding the greatest use and standard value built into RLX.

We found the sport all weather tires to be too stiff for RLX. Acura has gone to great lengths in achieving world-class cabin quiet, only to have the peace disrupted by an aggressive tire.

The braking mitigation and voice activated navigation proved to be problematic in the first few hours of driving. As we became familiar with Acura’s accident avoidance systems, the braking worry dissipated. However, voice activated navigation failed to recognize me, and I found the touch-pad type command to be flawed. This may be a learning curb related glitch. However, switching to my smartphone navigation, direction command through the RLX system was flawless.

I found the general exterior styling of RLX to be a bit mundane. Where the car shines is in the cabin.

RLX is missing a 40/60 rear seat configuration, in other Words, no snowboard pass-through for RLX owners.

I’m not a big fan of current accident avoidance technology. I’m one of those drivers that feels confident in piloting an automobile. Yes, I know much of the electronic safety features can be disabled by the flip of a switch and that lives could and will be saved by these systems. Here’s what I’m getting at.

Save yourself some time, sit down with the manual for RLX before driving, here’s why. Acura has incorporated some of the latest ground-breaking electronic convenience and safety features available on the market today in RLX.

We wrote about RLX driving impressions yesterday. In closing We find the 2015 Acura RLX to be an exceptional statement in luxury personal transportation. Does it outshine the competition? Certainly in superior interior comfort and functionality. When considering the top offerings of the premium sedan class, we believe that RLX merits a test drive. For those willing to live with a bit less flash and leg, headroom room in the rear compartment, we recommend taking a close look at the TLX.

We look forward to driving the SH-AWD Hybrid soon.