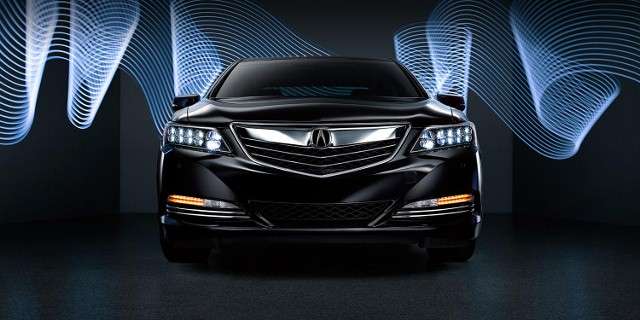 July 25 found us glancing over an officially released specification sheet for the 2015 RLX Sedan. Something was missing. This merited a second careful perusing of the extensive list of standard features, tech-rich personal electronics and Mellano leather trimmed 10 way adjustable heated seats. Yes, we determined that this was Acura’s Flagship Sedan, but no Hybrid. Has the RLX Hybrid Sport Sedan production date been delayed?

As demonstrated by the delayed delivery of the 2015 TLX, Acura does not release a car before it’s perfected.

Weighing in at 4,000 lbs in standard trim, the size of a BMW 5 series and going head to head with Cadillac, Lexus and Mercedes Benz, Acura has promised fans a world-class gasoline/electric 2015 RLX Sport Hybrid and must produce it to remain competitive in a crowded segment.

Here’s the problem we have with the standard specification 2015 Acura RLX. As indicative of this luxo cruiser price tag, starting around $50,000 and crossing well into the $70,000 range, fully loaded. The Acura RLX is a serious automotive investment by any measure. We found the 2014 RLX to be impressive, but was it a game changer for Acura?

Looking to the competition we find an unprecedented charge for the gasoline/ electric hybrid finish line. Manufactures gain sales momentum and brand loyalty by being first to market. Acura knows this and promises a relatively affordable 2015 RLX SH-AWD Sport Hybrid for 2015. But, we’ve yet to see a release date.

BMW and Lexus has one, Acura needs one. Hybrid drive technology is the most viable solution for producing greater combined horsepower and torque while increasing mph and reducing exhaust emissions. For 2014, Honda blew the doors off of the competition(Toyota Prius) with the introduction of the Accord Hybrid. We expect Acura to do the same with the 375 horsepower 2015 RLX Sport Hybrid.

Looking to the numbers: We find that Acura’s RLX in standard FWD trim posts a rather nominal EPA mpg of 20/31/24. While fuel economy may not be on the top of the list of those Acura fans wishing for luxury and performance, BMW, Lexus and Mercedes have the mpg numbers beat.

Where the ball falls back in Acura’s court is price point and value added standard features. No other maker can touch Acura’s price point, while preserving standard features, safety and personal electronic interface convenience. A 377 horsepower, 3 motor hybrid RLX with a claimed mpg of 28/32/30 would be a game changer for Acura in 2015. By producing the RLX in North America, Acura effectively undercuts the competition where it counts, the bottom $ line. More car for less money spent.

We’re hopeful that Today’s Acura press release(minus Hybrid specification) is not indicative of yet another production stall. We believe that the RLX Hybrid Sport Sedan will be worth the wait.