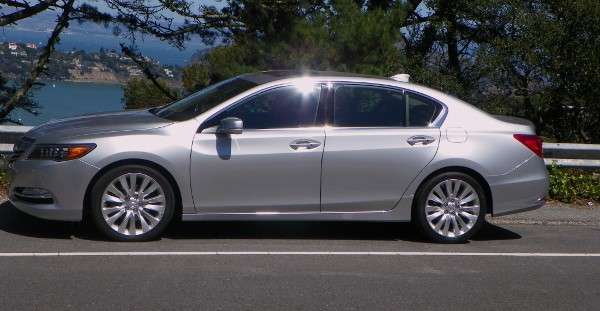 While arguably not the most photogenic luxury sport sedan in its segment, 2015 Acura RLX looks and performance still turns a head or two while outpacing the competition in comfort and safety features. We were pleasantly surprised by RLX more than once.
Advertisement

As I pulled Acura’s flagship onto a very busy Monday morning 101 southbound commute, 2015 Acura RLX stepped up to the task of getting us to S.F.O. in one piece; not an easy task.

San Francisco, Marin County traffic is said to be worst than L.A’s; Could be, I actually moved from the North Bay to Eugene, Or. a decade earlier to escape the I-580, 101 highway commuter crawl. 8 million inhabitants will do that to traffic patterns.

This Monday morning, thanks to Acura Torrance, I was at the helm of Acura’s 2015 RLX V6 with P-AWS (precision all-wheel steer) and advanced technology package. With a MSRP of $60,457, we expected much of Acura’s flagship. Over the next 48 hours, I would learn the quirks and attributes of Acura’s top of the line luxury sedan. RLX would keep me out of trouble more than once. RLX possesses performance and safety features that shine in crowded and often dangerous commuter traffic. Much like the all new 2015 TLX, Acura RLX is an automotive transformer, we’ll get back to that later in this article.

Presented by Acura for 2014 as a total redesign of the slow selling RL, RLX has received mixed reviews from the automotive press and driving public. Me? I like RLX, but it took two days before I truly grasped the techno-wonder and hidden performance and safety aspects of RLX. For 2015 Acura RLX remains mostly unchanged. Our’s sported the heated smart steering wheel, a change for 2015. We look to review the RLX SH-AWD and Hybrid soon, but they haven't arrived in North America as of this posting.

After a rather uneventful flight, I boarded a Park N Fly shuttle to pick up RLX. I’d extensively reviewed the 2015 TLX a few weeks earlier( loved it) and was looking forward to driving Acura’s largest sedan. My loaner(Thank you Vince and Team) was an RLX with Advance Package dressed in Silver Moon metallic with black on dark and light gray interior.

For me it wasn't love at first sight. I found the seats to be initially to firm and the sport rated tires unnecessarily rigid. But, much like a less than supermodel office assistant with a fantastic personality, 2015 RLX grew on me. It’s a very likable understated luxury sport salon. That’s correct, RLX can and does run in the same company as Mercedes Benz E Class, Audi 6 and BMW 5 series. It feels a big( inside) as a BMW 7 class, but handles like a much smaller car, that’s the magic of Acura

When driving RLX, I couldn't believe the near instant delivery of acceleration when needed. RLX shape-shifted from a touring sedan to a performance sedan with the press of a spot mode button in less than 3 seconds. I’ll admit it, I’m a big Acura/Honda V6 fan. For RLX, our favorite 3.5 liter SOHC i-VTEC is direct inject and normally aspirated, claiming 310 horsepower and 274 ft-lb torque.

Not the highest H.P. numbers in the segment but more than adequate on the performance side. The standard transmission for RLX is a 6 speed automatic with “sport mode,” Sequential SportShift paddle shifter and “ Grade Logic” control.. While this car is an absolute pleasure to drive in normal mode, we soon discovered the advantage of sport mode and paddle shifters in transitional workday commuter traffic, they absolutely work on RLX, and saved our collective behinds more than once.

Utilizing cylinder management and variable timing, RLX claims a combined MPG of 24. Not bad for a 4,000 lb tech-rich luxury cruiser.

The measurable, aesthetic quality of RLX fit and finish is unquestionable; It may be a Japanese manufacturing pride and principle thing. Not to take anything away from North American Acura(damn fine product)this made in Japan RLX was visually flawless. Believe me, as an automotive journalist, we look for flaws in exterior paint, chrome plating, coatings, interior coverings, laminates and finishes. I've read countless criticism as to Acura’s RLX body design. While some call it too plain and boring, I look to the style as a study in understated elegance and minimalism.

Much like Mercedes Benz and Rolls Royce of yesteryear, Acura design studio has opted to pen a car that will stand the test of time. RLX will look as good in 10 years as it does today. Its organic to hard lower body line transition is impeccable and timeless. hood to grill and rear trunk line to tail light interface, flawless. Great looking lower cowling, reduced grill architecture, nicely integrated lighting, door handles and chrome accents; no fads here, just time tested understated elegance.

On a recent trip to Sonoma Sears Point Raceway to cover Acura’s TLX-GT race car, RLX turned heads in the company of Bentley, Porsche and Mclaren. People that know cars and functional car design appreciate the understated elegance of RLX. From grill to trunk line, RLX preserves Acura lineage while traversing(slowly) to the next evolution of Acura as demonstrated by the 2015 TLX.

It’s the little details that catch the eye and the mass of the car that carries the message forward. 2015 Acura RLX is a rolling statement of non opulent success meets fine crafted automotive engineering; and that’s before you open the cabin door.

State of the art seating

On first sitting I found the driver’s seat to be overly firm. While this is a personal assessment, I believe that in today’s world of memory foam and infinitely adjustable seat positioning, sitting in a luxury segment salon should be a pleasure, not painful.

I noticed that on day 2 of our test run, the driver’s seat began to soften up a bit. With less than 200 miles on the odometer, the heated and ventilated 12 way adjustable power seat( driver and passenger) took on the firm yet comfortable support of a premium Italian loafer; It too grows on you. And then I discovered that the seats have 4 firmness settings, back and lumbar support as well as heating and cooling settings.

Take one of the finest executive office chairs on the planet, put 310 horsepower and 275 lb-ft torque under it. Now toss in the a full glass dash with touch screen capabilities and Bluetooth connect ability, That’s RLX. Sitting in stop and go traffic for 3 hours, I marveled at how much I didn't care. RLX had caught my attention, I felt like a kid in a candy store with a hundred bucks in my pocket.

If I could change one textural component of the RLX interior it would be to replace the f aux wood(high grade wood grain laminate) with the real thing. This car merits real wood accents. No big thing, perhaps there's an aftermarket kit available.

I would also like to see the lower interior door pillar trim replaced with a heavier laminate or a fabric covered metal or aluminium. The carpet, trunk liner and headliner is of superior quality in RLX; a true viewing pleasure. The center console (2 way) sliding glove box is massive. This is a very nicely crafted detail as is the lockable pass- through to the carpeted trunk.

Acura has done a commendable job of providing world class storage and cargo areas throughout RLX. While RLX is designed to carry 5, with the rear center armrest placed in the down position, the rear seating area takes on the ambiance and comfort of an Italian leather sofa. This 6’5” journalist found the headroom more than adequate(2 inches to spare) with superior leg and stretch room.

In the rear cabin one will find quality seat-back storage pockets and overhead aircraft style lighting for reading. For the rear seat passengers, adjustable heating and air conditioning is controlled from a center console. Scenic viewing is exceptional from the rear seating lounge and pull down shade curtains are provided for reducing heat and glare. A lockable access hatch to the trunk resides behind the center armrest when in the up position: a nice detail.

Our 2015 RLX came equipped with Acura’s heated smart steering wheel. My everyday driving wheel is leather trimmed and well worn. The initial hand feel of the heated grip is foreign. Time will tell how well this is accepted. With infinitely adjustable dual climate control, heated seats and rear heating control, I can’t imagine ever needing a heated steering wheel. But then again, I don’t reside in the snow-belt; perhaps it’s designed to dry wet gloves.

Note: The seat stitching, door trim, pillar to headliner interface and molded dash are of exceptional quality in RLX. In my opinion(Mercedes, Porsche and Volvo owner,) I find Acura RLX to meet or exceed German and Swedish interior quality and ergonomics standards. I won’t encroach on Infiniti and Lexus territory, I don’t have time to debate with their faithful owners.

The interior quiet of RLX is bordering on ire. While I didn't have a D.B. meter in hand, I did perform a test or two. With the Krell 14 speaker audio system set at its lowest setting, one can hear the stereo(clearly) over exterior traffic and road noise. With the stereo system off, one can hear himself think; it’s that quiet.

Seriously, other than some very minor wind buffeting off of the driver side mirror, a muffled tire thump in a pothole, the RLX exterior road and environment generated noise deadening is world-class quiet. How does Acura do this? Read more about the cars features and specifications here.

Acura is all business when it comes to driver safety, performance and personal communications connectivity. The RLX dash is reminiscent of a Honda Jet cockpit. While that may be a bit of an overstatement, prepare to pull out and study your owner’s manual for a few hours, you’ll need it.

On Friday we’ll dive into the performance and technical side of RLX.

Dan wrote on November 25, 2014 - 7:24pm Permalink
I have to say that I agree with your assessment of the RLX. In my 40+ years of driving, I've owned everything from Alfa Romeo to Plymouth. My last car was a '04 TL and I like my Acura dealer so when I needed a car in May, I ended up with a black on black RLX Advance. Since there have been some so-so reviews and Consumer Reports didn't recommend the car, I got a pretty good discount on the car. I ended up getting a price reduction of about $13k from MSRP. I think others have done better, but the area I live in (DC metropolitan area) doesn't seem to have really good deals available compared to some other parts of the country. The TLX wasn't out yet, but the price I paid wasn't much more than I could get a TLX Advance for now. I have to say that I love this car and don't regret my decision to buy one. The acceleration, ride and handling suit me very well and the torque steer seems pretty much nonexistent to me, especially compared to my old TL, which I really liked also. I love the Krell stereo. I didn't think the sound system would matter to me, but now I notice the flaws in other systems. I've driven the car about 5K miles and haven't had any issues. Fit and finish are excellent. The DC area is noted for its traffic jams but I really don't mind them as much now.
Parks McCants wrote on November 25, 2014 - 10:17pm Permalink
Welcome Dan. In actuality the RLX is a limited production quality built luxury car with Acura attributes. For its dimension and weight, I find it exceptionally well handling and fun to drive. Enjoy your RLX and thanks for the detailed comment.