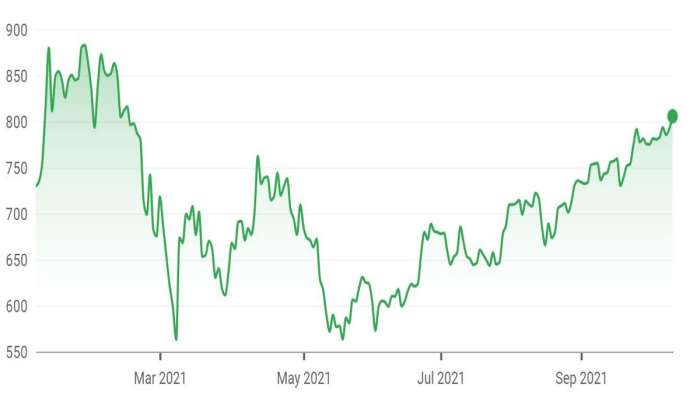 Tesla Stock Headed For All Time High In 2021

Tesla stock started the year at $735. It's now trading for about $805, an over 10% increase for the year. Here's why we think Tesla is headed for an all-time high and why we think the stock will keep gaining well over 10% each year for the coming decade.

Tesla continues to deliver record quarter after quarter after quarter. Deliveries in China, the U.S., Europe, and world-wide continue to be above what wall street is predicting. Let's take a look at how fast Tesla is growing in some key metrics based on its last quarters earnings report. Note - we think Tesla will do even better in Q3, 2021.

Tesla 2nd quarter earnings report and increase from prior year:

These key metrics give an idea of just how fast Tesla is growing and how fast their revenue and profit are growing. It's amazing to me that a company with an 800 billion market cap is growing revenue at 100% year over year and is growing earnings over 900% from the prior year.

Why Is Tesla Doing so Well?

There is a reason Tesla is doing so well. The five key areas mentioned above are revenue, net income, diluted EPS, net profit margin, and operating income. Each of these are Tesla's key metrics to keep growing and I believe they will. First, here's what they mean:

Here's how Tesla is increasing all of these:

1: Tesla got rid of all radar and lidar for full self-driving

"The best part is no part," is a famous quote by Elon Musk. By getting rid of lidar and radar, Tesla reduced the cost of the full self-driving suite of hardware for its vehicles and uses vision only from cameras. This is going to increase net income, diluted EPS, net profit margin, and operating income

Elon Musk has stated that Tesla's biggest advantage will be its manufacturing. I agree with this. Because electric vehicles are in the early stages, it is important to get to market first as fast as possible, with high quality and a car that beats internal combustion engines.

Tesla has improved manufacturing by getting rid of extra robots, improving with each new Giga factory. For example, Giga Berlin is much more streamlined and efficient than Giga Fremont, CA.

Tesla also makes use of the Giga Press to make large portions of its vehicles and uses a die casting machine to quickly form the liquid material used to make its large car frames. These changes will boost net income, diluted EPS, net profit margin, and operating income

3: Tesla is creating advanced software with over the air updates

Tesla makes updates to its vehicles, making its cars like a robot on wheels. Tesla has been working on full self-driving for many years now and we are at version 10.2 of FSD (full self-driving). This version is much better than the versions from years ago, but still needs work. Owners of a Tesla vehicle who have purchased FSD will get updates until Tesla has a car that can drive super human, 10 times or greater than the average human.

Tesla's advanced software and over the air updates are appealing. One can use auto pilot and have the car drive you on the freeway without much intervention at all. When FSD is ready, one could make their car an autonomous robotaxi and earn money for you. These are all very appealing features!

Tesla's software will increase all metrics: revenue, net income, diluted EPS, net profit margin, and operating income because of the boost to total sales, and the money made from FSD will mostly be profit for Tesla as it is software.

There is a global chip shortage going on right now that you might have heard about. Tesla has very smart engineers working for it and they are doing their best not to be delayed. Tesla will write their own chips if they have to. Anything that is causing big delays will be done in-house by Tesla in order to not be caught up in the supply chain.

Tesla has produced far more vehicles this year than they otherwise would have with their ability to innovate and solve problems. The biggest increase that comes by doing this is total revenue.

5: Tesla is thinking ahead

Tesla will be spending the next couple years getting Giga Berlin and Giga Austin, Texas ramped to volume production. This means that the factories will be producing hundreds of thousands - even millions of vehicles per year. But it will take time to do that.

Tesla will execute on this and make it happen just as they did with Giga Shanghai. Shanghai is now producing over 650,000 vehicles per year based on record Q3 deliveries reported in China!

Tesla has future products coming. Namely, the CyberTruck, the next generation Roadster, a van, a bus, and quite frankly, we'll probably see a vehicle to address every major segment of vehicles out there that are safe to drive.

There is also the Tesla Bot, optimus sub-prime, something that Tesla hopes to use to ease the labor burden on society. I believe Tesla will eventually tackle air travel with a vertical take off and landing plane eventually, once batteries have improved to make it economical and viable.

This ability to think ahead is probably going to make Tesla trillions of dollars. It will increase revenue the most and Tesla will continue to refine its new products with its innovative mindset.

Barring a major catastrophe in 2021, I believe Tesla will reach an all time high around $930. Some people would say this is way to high for Tesla with its Price Earnings Ratio at around 420. But with the rate of growth Tesla is showing and their ability to reduce costs and earn a profit, in a couple years time, that Price Earnings Ratio will become 100, then 50, then 30, then 20 even before the decade ends, reaching parity with what regular companies who aren't growing as fast are doing... But I'm not sure Tesla is ever going to slow down... at least not for a couple decades.

What do you think about Tesla stock and it reaching an all-time high in 2021? Will it do it this year or sometime in 2022?