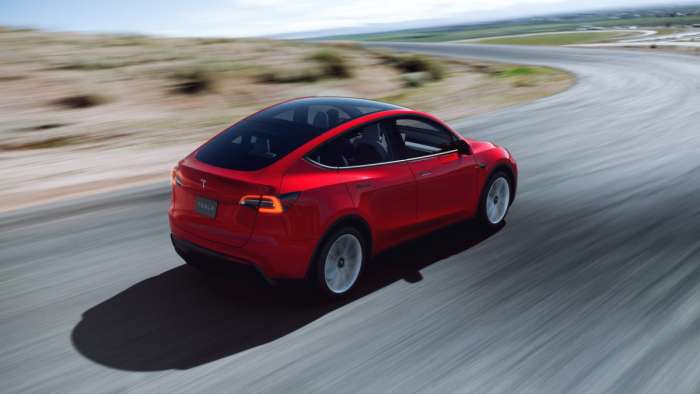 We have news that Tesla is releasing the Model Y Performance vehicle in China. This is the first time China will see this vehicle and is good news for Tesla.
Advertisement

The Model Y Performance is one of Tesla's fastest vehicles with a base price of $59,960. It can go 0 to 60 mph in 3.5 seconds, has a range of 303 miles, and a top speed of 155 mph. Orders in the U.S. are about 4 months of a backlog to February of 2022 (from November 2021). Tesla was showing signs of making this mover earlier in the week and we've seen price hikes across the board for all other Tesla vehicles.

The Model Y is Tesla's most recently released vehicle. We are, unfortunately, going to have to wait until late 2022 for the Cybertruck and until sometime in 2023 for the next generation Tesla Roadster. The Model Y when paired with the Model 3 is one of the best selling one-two punch of vehicles not just for electric vehicles, but for any vehicle.

We wrote a while back that the RWD Model Y would sell like hot cakes in China and this has proven to be true. There are reports that the RWD Model Y in china is sold out through 2021 and that it was the third best selling EV in China for October, 2021. Pretty impressive for just being released.

If we look at Tesla's China website, we can see that the Model Y Performance is about $60,740 in USD, which is about $1,000 more than it is in the U.S. Because this is Tesla's newest vehicle to be released, we believe that margins on the Model Y vehicles are going to be second only to the Model S vehicles and eventual release of the Cybertruck and Tesla Roadster.

Elon Musk has stated that he thinks the Model Y will eventually be the best selling vehicle of all time - first by revenue and eventually by volume. If this is true, the Model Y is Tesla's most important vehicle and Tesla should continue making improvements to it over time.

If there is one concern I have with the Model Y and all of Tesla's vehicles is that outside of the color of the vehicle, they all look the same. There's not too much wrong with that right now, since there's only about 2 million vehicles on the road, but what happens when there is 10 million, 20 million, or 50 million Tesla vehicles on the road. Are people going to want some variety when every vehicle they see looks like their own.

I would be very curious to see what Tesla does about this, if anything, in allowing for customizations of their vehicles. One way to get around this is to do what is called a "wrap" for your vehicle, which allows you to do a custom design. In fact, a friend of mine has an Iridescent Tesla that looks very unique and she spent just $1,000 for a wrap. Not bad if you just get white paint for free on a Tesla and then get a wrap.

What do you think of the Model Y performance being released in China? Is it going to sell like hot cakes like the RWD Model Y?

Tesla Giga Berlin's New Hurdle: It's Not Only the Gov't, but Now Tesla Itself
Teslas Are Sold Out Until 2023, But The Timing May Reverse
END_OF_DOCUMENT_TOKEN_TO_BE_REPLACED