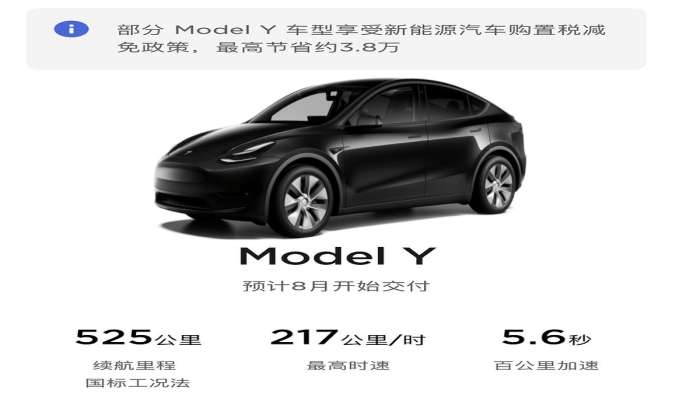 Tesla is now offering the Model Y standard range in China. The implications of this are significant as the cost is greatly reduced from the Model Y long range. Let's look into this more!
Advertisement

Looking at Tesla's China website, we can see that the Model Y is being offered in the standard range version in China. The implications of this are profound.

Why Was Model Y Standard Range Brought Back?

After the subsidy, the made in China Model Y standard range is about $7,000 more expensive than a U.S. Tesla Model 3 standard range.

I believe that the Model Y standard range is being brought back because Tesla has figured out a way to get much more range than it was before and can offer it at a lower cost, which will drive volumes of purchases to increase. It just makes business sense if they can truly pull off the 326 miles of range.

What Does the Model Y Long Range AWD and Performance Versions in China Look Like?

The acceleration and speed of the Made in China Model Y Long Range Performance is much better, but it has a little less range than the other models.

Due to the greatly decreased cost of the Model Y standard range, look for there to be a bump in China sales of this vehicle.

Nio's ES6 SUV starts at just over $55,000 and is going to have to find a way to reduce costs if it is going to compete with Tesla's Model Y standard range. Nio's ES6 SUV is about $11,000 more expensive! I think NIO is a great company, but it has its work cut out for it.

I also wonder if the reason the Model Y standard in China has the 326 miles of range is because of the batteries from CATL or some other improvement made to the vehicle. The range is over 80 miles more than the previous U.S. version that was removed from Tesla's website.

What do you think about the new made in China Model Y standard range? Will it sell like hot cakes? Are there any comparable vehicles to it?

DeanMcManis wrote on July 9, 2021 - 3:55am Permalink
The Chinese LR and Performance Model Ys do not use CATL's LFP batteries. Only the SR model does, which is the biggest reason why it has a lower price, in addition to RWD. The upmarket versions use LG's ternary lithium-ion batteries. Soon the upmarket Model Ys will use LG's NCMA batteries. They could have stuffed more LFP batteries into the battery case, but likely the real reason why the mileage is higher on the China Model Y SR, is that they use the NEDC rating method which is unrealistically high compared to the EPA's mileage test numbers.
Jeremy Johnson wrote on July 10, 2021 - 12:41pm Permalink
Thanks for this reply. I will research and update accordingly!