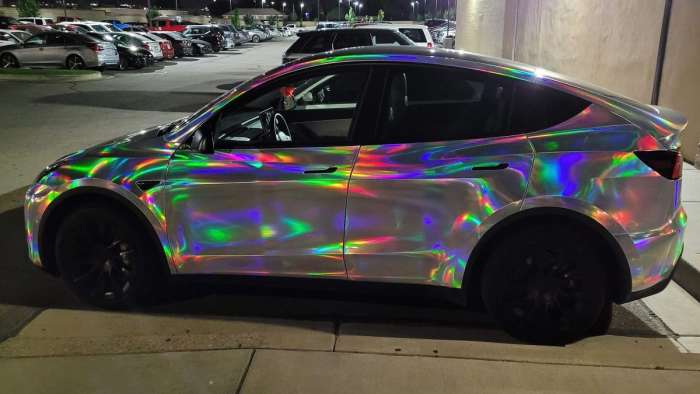 I had the honor of talking to one of my friends who bought a Tesla Model Y Long Range recently and wrapped it in an Iridescent cover. The effect is nothing short of spectacular. I asked her a few questions about it and have a few things to say so let's see what's in store!
Advertisement

Why did you want to get a Tesla?

I asked her what made her decide to get a Tesla. Her answer was that while she was driving one evening, she noticed a peculiar looking car that wasn't like all the others. She saw what I believe is a Tesla Model S, driving on the road.

When she saw that car, she began to get really curious about what Tesla was, after asking questions to others she knew about it and discovering that it was a Tesla.

One of her friends owned a Tesla and she asked to take a ride in it. She was immediately blown away and found the car to be very appealing in both look, speed, and performance. She knew from that moment, that she wanted to buy a Tesla car. She ended up getting a Tesla Model Y long range. Tesla making these amazing cars is a great use of its existing cash reserves.

How did you wrap it in an Iridescent cover?

She knew someone that had a specialty shop down south in the State she lives and contacted him about getting a wrap done. She's a big fan of anything sparkly or unicorn related, so an Iridescent wrap made the most sense.

A car wrap is a series of vinyl decals that are placed over the body panels of the vehicle, letting you drastically change its appearance. There's quite a few design options, including a standard glossy color, gradient color, matte finish, chrome metallic color, and full-on graphics treatments.

She was able to get the car wrap done for about $1,000. Not bad for a car you're going to be driving all the time. Whenever we go out as a group, she has people constantly stopping her asking about her Iridescent Tesla. If you wanted to get your own wrap done, you could just search car wraps near you and probably find one.

I would love to see a wrap in a new Tesla Model S Plaid!

Other styles of wraps of Tesla cars

There's quite a number of wraps that you can do on a car:

You can view these wraps posted on my Twitter account here. Getting a wrap for your car is a nice way to share your style or even promote your business.

One of the things I like about my friend's story is that she wanted to get a Tesla because she saw one. Word of mouth and proof of the product are the primary ways that a Tesla car gets sold. They still have not done any marketing for their product. That's how you know Tesla makes a superior product.

As I've seen her wraps and now many others, I'm curious what people may do oversees with cars made from Tesla's Giga factory in Berlin. What other styles and ideas will people come up with?

If you could get a wrap done for your car, what would it be? If you have an existing wrap, what kind is it?