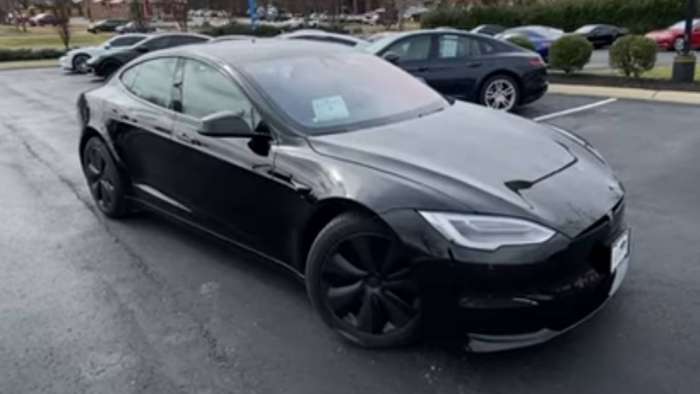 Elon Musk just stated that Tesla could have made a 600 mile range Model S, 12 months ago. He also said that the vehicle would not have handled as well, weighed down by extra battery and would cost more. Do customers want a 600 mile range EV? Let's discuss this and more.
Advertisement

Elon Musk just stated that Tesla could have made a 600 mile range Model S, 12 months ago. He also said that the vehicle would not have handled as well, weighed down by extra battery and would cost more. Do customers want a 600 mile range EV? Let's discuss this and more.

With Elon Musk stating that Tesla could make a 600 mile range Model S, it makes me wonder what Lucid Motors did to get a 520 mile range Lucid Air Dream Edition. Did they create a superior tech with their battery, or did they simply cram more battery in the car to get that kind of range?

I think the most likely outcome is that Lucid Motors crammed more battery in the car to get the extra range. Tesla has been making EVs since 2007, and I would be surprised if Lucid somehow came up with a way to make a superior battery. However, I could be wrong, but the evidence seems to suggest Lucid just put more battery in their car.

A 600 mile Model S sure would be nice. You could drive for a long time without having to charge your vehicle. You wouldn't get as much acceleration or performance due to the battery weight, and the car would cost more - those are two negatives to that high of a range.

With Giga Texas opening up soon and the 4680 batteries coming, I think Tesla will eek out range and performance by virtue of this new battery pack. Let's wait and see what the specs of the new Model Y vehicles out of Giga Texas are!

I think that some customers do not care as much about performance, handling, and cost. They just want a super long range vehicle. Those customers are in the minority, I believe. The reason being is that an EV is already a fairly expensive car at base value - if you add more to that, it takes more people out of the range of affordability.

Customers with a lot of money (a small % of the population) are those who want a super long range EV. I think eventually EV's will get there at an affordable cost as battery technology improves, but it won't be for a while. What year will a 600 mile range EV cost $25,000? I'm not sure, but it won't be until supply chain challenges and chip shortages are solved.

Most customers can handle a 250 to 300 mile range EV for day to day activities. For me personally, I mostly commute to the gym, to the store, and occasionally to other people's houses, but nothing is more than about 30 minutes away. Eventually, I'll get my Model 3 RWD with LFP batteries and this vehicle should be pretty efficient for the battery it has. That's what I want - an efficient EV that will last a lifetime. We'll see if the Model 3 RWD is it.

How Much Extra Cost Would 600 Miles of Range Be?

In order to figure out how much extra a Model S would cost to get to 600 miles of range, I did some digging. Let's assume the base battery for the Model S costs around $15,000. This is according to an article where Tesla quoted someone to replace their battery for their Model .

I will then take the miles of range divided by the total cost of the battery to get a cost per mile for the battery. Going to Tesla's website right now (as of March 2, 2022), shows me that the longest range Model S has 396 miles of range (with the most range efficient tires - the 19 inch tempest wheels).

Let's take this 405 miles and put it into $15,000. You get a cost of $37 of battery for every 1 mile of range. I think there is more to the cost here, such as the motors, design of the vehicle, and labor, but let's just use this as our example for now.

If we wanted 600 miles of range, we simply would need to multiply that by $37 - not factoring in any of the extra work needed for the extra battery. You get a $22,200 battery. Let's add on $5,000 for the necessary complexity of making this a new manufacturable battery and the extra cost of labor for it (along with any extra motors, power train work, etc...). That's an extra cost of $12,200.

Tesla could theoretically make a 600 mile range Model S for $107,190. But does it make sense to do so? Tesla is all about manufacturing scale and making things simple. If Tesla introduces this long range model, they now have to add additional parts and processes in order to make this work. And the price point is more expensive. And the 405 miles of range on the base Model S is likely more than enough for 99% of people.

Still, it's interesting to put the numbers in to see what the costs are. What I think will happen is that we'll see gradual improvements to range over time and that eventually, there will be a natural progression to 600 miles of range at an affordable cost - even the base Model 3 will get there given enough time and innovation.

We could’ve made a 600 mile Model S 12 months ago, but that would’ve made the product worse imo, as 99.9% of time you’d be carrying unneeded battery mass, which makes acceleration, handling & efficiency worse. Even our 400+ mile range car is more than almost anyone will use.

Will Tesla ever make a 600 mile range Model S? Do EV owners truly only need 250 to 300 miles of range for most day to day activities? Will EVs get to 600 miles of range eventually at a low cost?

giampigua wrote on March 3, 2022 - 4:21am Permalink
1) we are talking about EPA range. But people needs real world range. which is 40/50% less if we consider winter time and the fact that the use at the extreme capacity increases the deterioration of the batteries. 2) range is important at highway speed, not at city speed. This stresses the previous point. 3) it is not necessary to extend the range to all cars: it's just enough to offer different versions: anyone will buy what he prefers 4) we can simply observe that the range argument is always the first argument in communications, advertising etc. This points out that a substantial part of car purchasers, specially those who are not buying an EV, are influenced by this issue. 5) Musk himself was stressing a lot the "range argument" till he was building the longest range car. I remember when a long range + model S was introduced that he announced something like "the longest range car has now more range". Previously he also "debated" with EPA saying that during a test the EPA inspectors did not exploit the battery fully, just to gain something like 5 miles or so... Now that he does not have the product he is denying the importance of it. 6) in my personal case, I would pay more for more range. Not only because I make frequent long trips, but because in many circumstances it is more convenient to be in the position to choiche where to charge. both in terms of expenses, and in terms of comfort. For instance: if I visit a client, it is not the case to charge my car at his premises (even if available). this costs half hour that adds on an already busy day... 7) finally, I believe the cost is not the main issue: If I could chose between a "passat level" EV with 500 miles range or an "audi level" EV with 400 miles range, I'd definitely chose the "passat level" one. The fact that distorts the discussion is that longer range cars tend to be offered with luxury finish - see the case of EQS. What about an EQS hard body with a passat style finish? Probably a frunk would be available in exchange of a "less purified air" in the cockpit.
DeanMcManis wrote on March 4, 2022 - 2:55am Permalink
I average driving about 60 miles a day, including weekends. I figure that the 25kWh/250 mile Aptera EV would be fine for most of my driving needs, and the occasional longer trip. Especially as I will have the full solar package, which will cut my net daily electricity use. But accounting for winter weather and the fact that I expect to charge mostly from 10%-90% I decided to choose the 40kWh/400mile battery. It didn't cost too much more, and affords me some breathing room without too much of a weight burden. It is nice that Aptera offers bigger battery options for those people who need that extended range (250, 400, 600, 1,000 mi). But for me, the 400 mile battery is a "right-sized" sweet spot. I prefer having an EV that gets further on less energy, rather than loading up tons of batteries to get a huge amount of range that is rarely used. The GMC Hummer has a 200kWh battery pack and weighs over 9,000lbs, getting 300 miles of range. That capacity of a battery in a Tesla Model S would easily achieve 600 miles of range, especially using 4680 batteries. But most people drive under 60 miles per day, so hauling around an extra ton of batteries is a total waste.