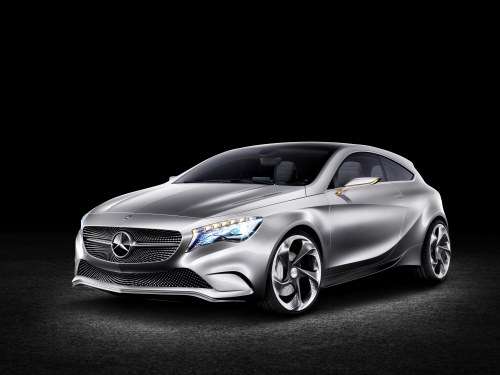 Just as Mercedes-Benz USA (MBUSA) reported March with a 12.6 % sales improvement over March 2010, plus the company's highest March volume and first quarter on record, the company revealed a new concept-class era with the Concept A-Class which makes its debut at both the 2011 New York and Shanghai Auto Shows later this month.
Advertisement

The aggressive appearance of the Concept A-Class, with its long hood, low silhouette and slim side windows, is given depth by the interplay between lines and surfaces. Inspiration was drawn from the wind and the waves, as well as aviation engineering. Think defined edges and a free interplay with the body surfaces.

Aside from an expressive and athletic design, the Concept A-Class technical highlights include a new turbocharged four-cylinder gasoline engine, a dual clutch transmission and a radar-based collision warning system with adaptive Brake Assist.

According to the latest news release per mbusa.com, the Concept A-Class literally previews a new compact class era at Mercedes-Benz. This front-wheel drive model derives power from its four-cylinder gasoline engine from the new M270 series. It was designed for transverse installation, and thanks to direct injection and turbocharging, offers high performance together with minimal emissions and fuel consumption.

The Concept A-Class is equipped with the two liter variant of the new engine, developing 210 hp. This BlueEFFICIENCY engine is mated to the new Mercedes-Benz dual clutch transmission.

As a world first in the compact class, the concept car features a radar-based collision warning system with adaptive Brake Assist, which lowers the risk of rearend collisions. This assistance system gives a visual and acoustic warning to an inattentive driver and prepares Brake Assist for a precise braking response. Braking is initiated as soon as the driver forcefully operates the brake pedal.

More on the design

The exterior design of the Concept A-Class features the combination of defined edges and free interplay with the body surfaces that Mercedes-Benz first showed in the F800 Style. The side view is structured with three prominent lines: the front structural edge above the front fender forms a dropping line, while the prominent shoulder muscle above the rear axle underlines the car's coupe-like character. A further line extends upwards from the rear wheel arch in a sweeping curve.

The front end of the Concept A-Class immediately catches the eye with the Mercedes- Benz star logo surrounded by what looks like a star-filled sky. Where there are usually openings or louvers, the radiator grille consists of numerous metallic silver hexagons on black stems. This theme is reflected in the design of the wheels.

The headlights of the Concept A-Class continue this design element with innovative full-LED high-performance headlamps repeating the starry sky motif with numerous light points. The daytime running lamps consist of 90 optical fibers with aluminum sleeves which are arranged in a wing-shape within the headlamp.

In the interior, the eye is immediately drawn to the dashboard which has the shape of an aircraft wing and a translucent, stretchable fabric lining. This enables the bionic, cellular structure of the dashboard to remain visible.

The shape of the air vents in the dashboard is reminiscent of a jet aircraft. The prominent dials in the instrument cluster are in red, inspired by the afterburner of a jet engine. The center console is designed as a modern flight control panel, with the shift lever designed as a "reverse thrust control".

A smartphone is fully integrated into the Concept A-Class. All functions are shown in the display as applications, and can be operated using the rotary/push control. The visual presentation of the display screen elements is unique, with a deep, three-dimensional appearance created by laser-like magenta-colored lines.