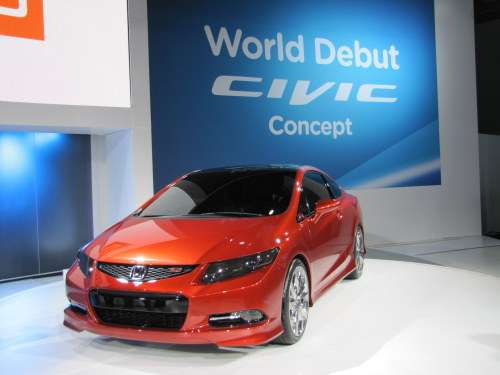 American Honda Motor Co., Inc, has introduced it’s 2012 Honda Civic concept model at the 2011 Detroit Auto Show press conference this week, and confirmed the inclusion of the natural gas powertrain amongst the range of options.
Advertisement

The 2011 NAIAS provided, not only the world with the first official glimpse at the styling direction of the all-new, ninth-generation 2012 model set to go on sale this spring, but that Honda is expanding retail sales of the natural gas-powered Civic GX model.

For the record, the is the only OEM-built, dedicated CNG passenger car assembled in America. The increased availability of the Civic GX helps bring inherently clean-burning natural gas technology to an even broader audience while also supporting diversity in transportation energy resources.

According to items compiled using information from the American Honda Motor Co. press release at the show, continuing production will occur at the Honda plant in Greensburg, Indiana. Honda also reiterated that the Civic GX operates with close to zero emissions and is the industry’s only natural-gas powered passenger car assembled in the country.

"Retail customers across the U.S. will be able to buy the GX as we expand sales from four states to nationwide,” said John Mendel, Executive Vice President, American Honda.

Building on its emphasis on fuel-economy, most upcoming Civic models receive Honda Eco Assist™ technology, already available in the CR-Z and Insight hybrids. The 2012 Civic is the first U.S. Honda model to employ Eco Assist technology in a gasoline-only powered vehicle. Eco Assist is just one example of how the new Civic can be customized and configured by the drivers to suit individual preferences.

More than 95 percent of all Civics sold in the U.S. as of calendar-year 2010 were made in North America at manufacturing facilities in either Greensburg, Indiana or Alliston, Ontario in Canada.