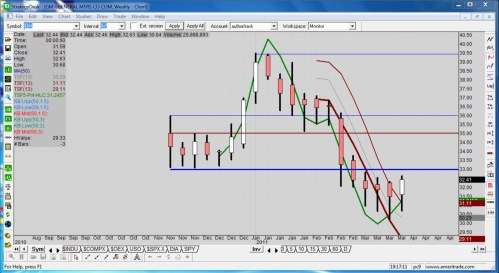 General Motors (NYSE: GM) stock traders viewed March as a successful quarter for GM in the United States, as retail sales surged 38 percent for its four brands, driven by demand for Chevrolet’s all-new Cruze compact sedan. The stock surged Friday to $32.41 after testing the $30 level for several weeks.
Advertisement

According to the GM news release, demand for Chevrolet Cruze drove the rise in GM March retail sales. The weekly chart of GM stock shows the Friday close on a positive note at $32.41, and the first up-week in over 11 weeks.

Many non-technical stock traders, though, prefer to understand the fundamentals which drove the sales. Fact is, all this was done in spite of a decline in incentives. Dealers reported 206,621 total sales during March, an increase of 11 percent; and this total included a 17 percent increase in retail sales, compared to March 2010.

Also, according to the GM news release, March’s retail sales increase was spurred by a 34-percent rise in passenger car retail sales, led by a 287 percent gain in retail sales of the Cruze over the car it replaced, the Cobalt.

This is not surprising, as a recent TN article reported PSCars.com had the Chevy Cruze as number two behind Mustang among the top-10 most-researched vehicles.

As a result, each of GM’s brands – Chevrolet, Buick, GMC and Cadillac – gained retail and total market share during the quarter. For the first three months, total sales increased 26 percent to 592,545 units compared to a year earlier.

“Our plan was to get out of the gates quickly in the first quarter and we succeeded,” said Don Johnson, vice president, U.S. Sales Operations. “Consumers responded favorably to the value of our broad lineup of fuel-efficient cars, trucks and crossovers.”

Total combined sales of Chevrolet Silverado and Avalanche, and GMC Sierra increased 11 percent in March, with retail sales also rising 11 percent versus a year ago. For the quarter, retail sales for GM’s full-size pickups rose 38 percent, while total sales improved to 130,866 units – a 31-percent increase.

GM stock (NYSE: GM) has been languishing since its post IPO high of $39.48. Trading below the IPO price of $33, the stock recently tested the $30 level and held. Friday’s news along with the general market buoyed the stock just under the $33 level.

Of course, this sales news surely was good from a trader’s perspective. Question is, will it be enough to support the stock above the IPO price? Furthermore, will the end of Quantitative Easing known as QE2 bring a ceiling to the entire market, let alone GM stock?