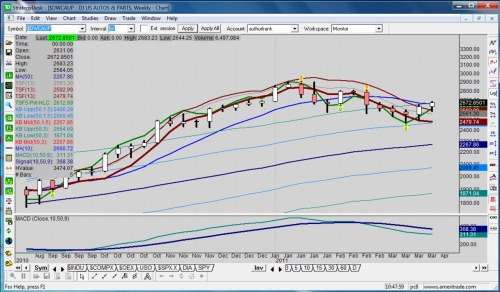 Jobs Report not affecting auto industry as much as dollar, earthquake and oil

Friday’s jobs report says the economy added 216,000 jobs in March, while the unemployment rate dropped to 8.8%. Question is, not how it affects today's trading, how will it affect the auto industry when the dollar is still weak, earthquake effects are still here and oil tensions are still in play?
Advertisement

For lack of a true auto index, we have little options but to use the $DWCAUP which measures the Dow Jones composite Autos and Parts. After the first hour of trading, the index was showing a bullish day.

As of today, though, GM stock (NYSE: GM) is still trading below its $33 IPO price, but up compared to yesterday. For the record, it’s lowest swing low for February was 30.20.

Same story on stock price for Ford (NYSE: F) which had a swing low in February at 13.75. Ford technology and product line is strong, but the stock is still languishing below its January high of 18.97.

Toyota (NYSE: TM) on the other hand, has run like a roller coaster. First it had all those recall issues, then came the government report which says their system has no electronic flaws; and then came the earthquake in Japan which affect the part supply chain.

Other auto manufacturers are affected by the same fundamental issues. Honda (HMC), it seems, is robust enough ,despite delays in manufacturing schedules in Japan. Korean automakers appears less vulnerable. However, Volkswagen (VLKAY) has been duly noted by experts to be the least affected of all the automakers.

The gain in jobs was viewed by experts as relatively broad-based, but with some sectors still lagging. The most notable element was the unemployment rate improvement was based on more people working than just discouraged workers dropping out of the labor force. That is significant.

In fact, the labor force rose more than the general population, indicating the market has improved enough to draw some of the unemployed back into the pool of workers.

From a trader/investor perspective, the jobs report is a lagging indicator. That means some of the issues that have led economists to scale back growth forecasts for this year aren’t yet reflected in this report.

For example, one area of difficulty for automotive alone centers on disruptions in manufacturing supply chains caused by the Japanese earthquake. Fact is, these ripple effects might not be truly felt for weeks or months. Still, manufacturing added jobs in March, but future is still uncertain, especially when auto parts may be pared back.

The rising dollar based on remarks by a Fed governor who stated rates may have to rise at least 75 basis points before the end of the year, turned dollar bears to cover some of their positions late yesterday and eraly today. That automatically led to a slight drop in oil prices, despite the fundamental problems in North Africa and the Middle East are still in place.

Meanwhile, prices of food and oil have been increasing, sparking worries about consumer spending. Corn planting, however, has risen immensely to cover both food and energy. Of course, the harvest will be based as much on weather. So, volatility is in order.

Bottom Line: Today’s report, however, noted wages as unchanged. If prices are going up but auto workers, for example, aren’t getting paid more, it spells good news for auto companies who can keep labor costs low, but suggests continued struggles for consumers.

Fact is, Toyota is raising prices in America with no raise in employee wages.

Those expensive EVS and hybrids will continue to be a challenge for consumers to afford, no matter how much oil and gasoline prices rise.