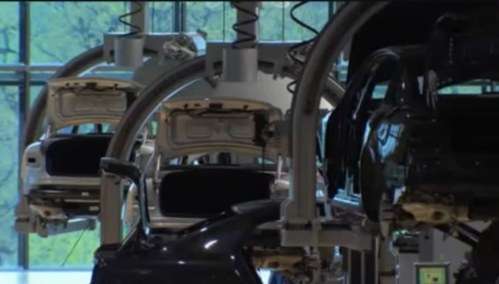 The Volkswagen Phaeton is a full-size luxury sedan/saloon manufactured by German automaker Volkswagen, and is described by Volkswagen as their "premium class" vehicle. Yet, it’s the manufacturing plant in Dresden that is the force behind the premium status.
Advertisement

The manufacturing plant in Dresden, though, is as much an impression to visitors as is the car. One would have to see a world’s fair to get such a glimpse of futuristic automotive assembly.

First, regarding the car, the VW Phaeton was first conceived by Ferdinand Piëch, then chairman of Volkswagen Group. Piëch wanted Volkswagen engineers to create a car that would overwhelmingly surpass the German prestige market leaders, Mercedes-Benz and BMW.

The car was later introduced at the 2002 Geneva Motor Show. For the record, the name Phaeton derives from Phaëton, the son of Phoebus (or Helios) in Greek mythology.

Unique to the car is its phaeton auto body style impressed by the type of horse-drawn carriage that once preceded it.

Regarding the assembly plant in Dresden, Germany, not many realize the degree of technology involved in modern-day automotive manufacturing. Fact is, a local Detroit-area reader, John Bunnel, was astute enough to catch it and forward the following video to me. At first view, I was so impressed that I knew I just had to share it with TorqueNews readers.

Another fact is, this video has already had over 3.5 million viewers on YouTube. What I wouldn't give for that kind of readership. Strange, I never saw the video until a few days ago, but that’s the nature of the worldwide web. Perhaps you haven’t seen it either. So, here’s your chance.

Like I wrote many times before, a picture or a video is worth more than all the words I can muster. Seeing is truly believing.

Bottom line here is, the auto industry has entered a the 21st Century. The very technology thought to be in the future has truly arrived; and this VW plant is testament to that fact.

Of course, cars are still too expensive in light of the economic conditions we’re experiencing. Nonetheless, cars will get better mileage, burn cleaner, leaving the air more breathable, and the more automation will replace tedious tasks.