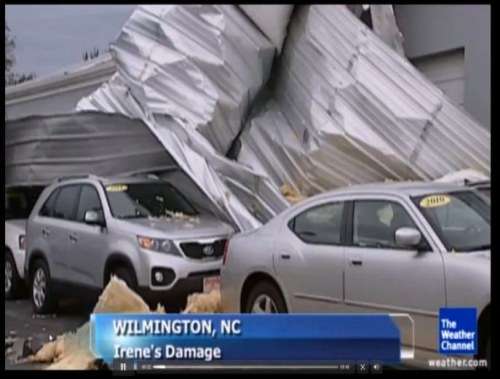 Although GM and BMW are the only auto manufacturers to have production facilities on the East Coast in the path of Hurricane Irene, all manufacturers have dealerships including some suppliers in the storm’s path.
Advertisement

While Hurricane Irene marched up the East Coast over the weekend and tornados spun off, killing as many as 22 people and leaving millions without power, the massive storm will be known more for its deluge of rain which triggered huge floods with reports of billions of dollar in property damage.

Obviously, this will affect the next quarter sales for most automakers, as it will affect the commisssions on sales at dealerships, not to mention the stocks themselves. For the record, stocks like General Motors (NYSE: GM), Ford Motor Company (NYSE: F) and even Toyota Motors (NYSE: TM) have been in a trading trough for the past two months already.

The fact that auto dealers keep most of their inventories out of doors does not bode well for profits let alone auto sales on the East Coast. Aside from the water intrusion from driving rain, think high wind damage from flying debris and, for sure, flooding; not to mention other possible damages that can come with a massive hurricane like Irene.

Then there are the buildings. For sure the cars can be easily replaced, but not so fast with the dealership buildings. This will affect sales for a longer term.

In an evening update by Automotive News , that Kia dealer with the torn roof says it is now classified as mostly cosmetic damage.

It was also notable this morning that no reports from GM, Ford or any other dealers appeared on their media websites. TN assumed assessments were likely still going on.

On the other hand, when markets opened and expected to trade normally, nothing was normal. By 10 a.m. the Dow was up 173 points. That still doesn’t mean much, though, for a dealership owner with a bunch of trashed vehicles on his or her lot. Same goes for used car dealerships.

According to Torque News editor, Armen Hareyan, his family was fortunately spared. He said this morning, “We are in Hickory, North Carolina which is about 5 hours driving distance from the coast. While we were expecting a lot of rain, what we got was only sunny days and a few high winds. The storm hit on the coast and moved north. We can only assume the dealerships in the coastal areas are more effected.”

Agai, that much was been confirmed by a video report from today’s Automotive News A.M First Shift Newscast with Jennifer Vuong, where a Kia dealer near Cape Fear in North Carolina took a major hit. Elsewhere in that area a tornado pulled the roof off of a used car dealership.

That wasn’t the only report either. Here’s a video shot from YouTube.

Be sure to still stay connected with Torque News as we will be reporting on anything related to the auto sector in the wake of Hurricane Irene. Questions now are, how much will auto sales be affected by the storm? And how many damaged vehicles will show up in other areas as used vehicles.

-----------------------
About the Reporter: After 39 years in the auto industry as a design engineer, Frank Sherosky now trades stocks, futures and writes articles, books and ebooks like, "Perfecting Corporate Character," "Awaken Your Speculator Mind", and "Millennial World Order" via authorfrank.com. He may be contacted here by email: [email protected] or on Twitter @Authorfranks

Used Cars Guide wrote on August 29, 2011 - 11:30am Permalink
Great story Frank. I would also advise people to be leery of hurricane damaged used cars hitting the market place soon. I wrote about it my used cars website at http://usedcars.about.com
Frank Sherosky wrote on August 29, 2011 - 12:36pm Permalink
Great idea for another article. Just how would you know a car has been in a flood or suffered hurricane damage? I especially agree with your assessment of Craig's List. Perhaps we should stay away for a while. Thanks for the heads up!
Used Cars Guide wrote on August 29, 2011 - 2:13pm Permalink
Quickest way to check for flood damage is to look in the trunk for signs there has been water (it often gets overlooked in thorough cleanings). There are other methods as well like picking up the floor mats and looking for water stains and rust in strange places. Inside of the car should never show rust under normal circumstances.