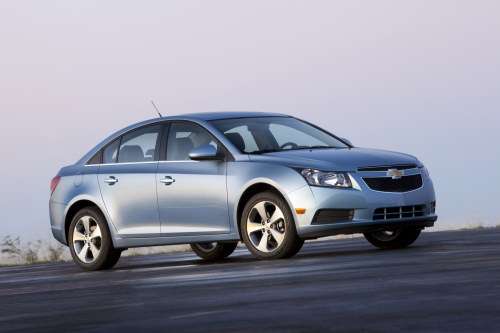 General Motors media was quick to place this story, and with good reason, as an unmodified Chevrolet Cruze Eco driven by an Australian couple achieved 64.42 MPG over a 23-day, 9,552 mile trip
Advertisement

According to the news release by General Motors Company (NYSE: GM), the 9,552 mile trip was sponsored by Shell Oil whereby John and Helen Taylor drove the Chevrolet Cruze Eco to the remarkable average of 64.42 miles per gallon.

That is 50 percent better than the EPA estimate of 42 miles per gallon highway for a Cruze Eco manual, already the most fuel-efficient, gasoline-powered car in the United States, excluding hybrids and diesels.

To achieve its segment-leading fuel economy, Cruze engineers focused on aerodynamic performance, mass optimization and powertrain enhancements. For example, the Chevrolet Cruze Eco was the first in the compact-car segment to offer an active air shutter that closes at higher speeds to reduce aerodynamic drag and opens at lower speeds to optimize engine-cooling airflow.

Weight was another major factor as engineers made more than 42 changes to reduce weight on the Chevrolet Cruze Eco, such as light-weight 17-inch wheels and tires save 21.2 pounds (9.6 kg) per vehicle.

For the record, the Chevrolet Cruze Eco features a standard Ecotec 1.4L turbocharged engine that delivers the fuel efficiency of a smaller engine, as well as the power of a larger engine when needed. Specifically, the Ecotec 1.4L turbo delivers 138 horsepower (103 kW) and 148 lb.-ft. of torque (200 Nm) between 1,850 rpm and 4,900 rpm. The wide rpm range for the maximum torque – a specific trait of turbocharged engines – helps the engine deliver a better driving experience and performance.

Now you may be wondering where Shell Oil comes in all of this. Fact is, it was part of Shell’s tips for improving fuel economy which are available at the Shell Smarter Driving website.

According to the Shell website, the Taylors are so passionate about fuel economy that they have two companies, Fuelacademy and Eco2driving, whereby they run global education programs, teaching drivers how to reduce their fuel consumption, reduce CO2 emissions, save money, drive smarter and safer. Between them, Helen and John hold 88 world records of which 42 are for fuel economy.

This test along with others by Helen and John literally proves the capability of the internal combustion engine (ICE) to achieve greater efficiency. Now imagine the next phase of technological evolution whereby automotive engines run like diesels except on gasoline. Further consider the next engine design which splits the 4-cycle phase in half, literally creating a hot and cold side to maximize thermal efficiency, then adding an air-hybrid feature to store energy for improved city driving.

Perhaps that 55 Average MPG proposal by the President is not so unfounded after all. Fact is, General Motors already has HCCI technology in its labs, whereby the engine runs like a diesel except with gasoline.

Furthermore, the auto industry has a number of alternate engine designs available for consideration under a license agreement. One of them is the Scuderi split-cycle engine; the other is the Tour Engine, an opposed pistion split cycle, not to mention an external combustion engine of Cyclone Power.

With 2016 government mandates around the corner, the industry just may be prepping the public to accept these new engine techologies as they are more cost effective from a manufacturing standpoint, and do not add as much to the purchase price of the vehicle like electrification.

LG's New EV Battery Plant Is a Welcome News for Tesla
Tesla Giga Berlin's New Hurdle: It's Not Only the Gov't, but Now Tesla Itself
END_OF_DOCUMENT_TOKEN_TO_BE_REPLACED