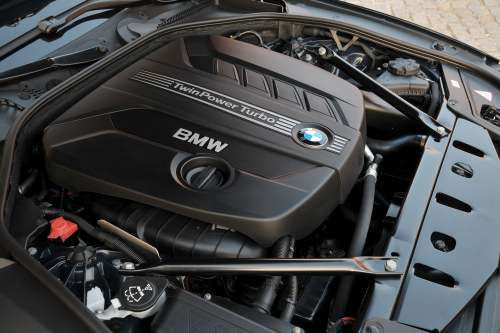 From the autumn 2011 lineup, both the BMW 5 Series Sedan and the BMW 5 Series Touring ranges will for the first time feature two newly developed four-cylinder gasoline engines with BMW TwinPower Turbo technology.
Advertisement

Think further on highly efficient engines from BMW, more standard-fitted BMW EfficientDynamics measures and attractive additions will be made to the optional equipment range, reaffirming the BMW 5 Series’ benchmark position on efficiency and driving enjoyment at the premium end of the upper mid-range segment.

According to the BMW Group press release, BMW TwinPower Turbo technology is key to maintaining this benchmark position. In fact, more diesel engines will get this technology too.

Also among the autumn lineup, the BMW 5 Series Touring line-up will be joined by a new top-of-the-line model, the BMW 550i Touring with V8 engine. All these measure will help the BMW 5 Series extend its segment leadership as the model range with the best balance of driving enjoyment and fuel economy.

The most fuel-efficient model of all is the BMW 520d EfficientDynamics Edition, which achieves average fuel consumption in the EU test cycle of 4.5 liters per 100 km (62.7 mpg imp) and CO2 emissions of 119 grams per kilometer.

With the launch of a new generation of four-cylinder engines with BMW TwinPower Turbo technology, the BMW 5 Series engines for the upper mid-range market now lead the way on efficiency and sporty power delivery in the petrol segment too.

If this sounds a bit familiar, you are right. For the record, Ford’s EcoBoost has been using twin turbos with downsized engines to achieve better emissions along with higher levels of power density. Notice how nobody, including Ford and BMW, have yet to introduce split-cycle versions of their engines; preferring to buy time by engine downsizing and powering up with turbos.

According to BMW news release documents, BMW has adopted this highly efficient, performance-boosting technology in the four-cylinder engines as well. The system, which delivers the exhaust gases from each pair of cylinders to the turbine via two separate channels, both in the exhaust manifold and in the turbocharger itself, provides more responsive performance. The fuel supply is precisely metered by the direct-injection system with solenoid injectors, while the latest version of the VALVETRONIC system provides even more precise air mass control and, in combination with Double-Vanos variable intake and exhaust camshaft timing, optimizes both efficiency and response.

For the other diesel engines in the BMW 5 Series, autumn 2011 will bring further improvements in power, and further reductions in fuel consumption, in line with the twofold goal of BMW EfficientDynamics.

The BMW 525d, for example, will get a new four-cylinder diesel engine with BMW TwinPower Turbo technology. This 2.0-litre all-aluminium unit features Variable Twin Turbo two-stage turbocharging and common-rail diesel injection with piezoelectric injectors. The new unit features reduced weight and, thanks to the VNT technology of the small turbocharger, instantaneous response. The small turbocharger comes on stream at low engine speeds, while the contribution from the larger turbocharger varies in precise response to throttle requirements.