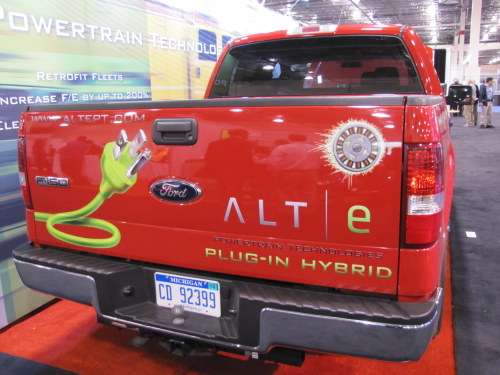 Fact is, before there ever was an EcoBoost engine, Ford sold tons of F-150 trucks as fleet vehicles with engines that were far more gas guzzling. Then ALTe came around to convert many of those trucks with its proprietary ALTe Green Box as shown at The Battery Show 2011.

Now, the Forbes list which features 100 privately-held, up-and-comers with compelling business models, strong management teams, notable customers, strategic partners and precious investment capital, has given ALTe a giant marketing feather in its cap. For the record, I found ALTe listed on the Forbes website as #98 of the 100 companies listed.

According to the news release, ALTe’s distinction as one of America’s Most Promising Companies is based on an algorithm that took into account everything from news announcements to job boards and court filings that the company and others listed announced this year.

Forbes teamed up with CB Insights, a Manhattan-based data firm that tracks investment in high-growth private companies, and developed complex software called Mosaic that mines myriad online sources to come up with one, algorithmically-derived score that measures a private company’s health. Forbes married Mosaic’s data-crunching with old-fashioned reporting to assemble a list of rising stars with bright growth prospects.

“Sizing up younger, privately held companies is hard: Their fortunes can change very quickly and there’s a dearth of public data,” says Forbes Executive Editor Brett Nelson. “We took a more comprehensive approach to evaluate their health and potential.”

ALTe’s increasing magnitude of substantive announcements in 2011 contributed to their placement on the Forbes list. These included a long-term supply agreement with battery maker A123 and electric motor supplier Remy, a preferred installer partnership with vehicle remarketer Manheim, a collaborative effort with Pacific Gas & Electric Company (PG&E) to test their technology on PG&E’s fleet of trucks, and a joint venture with Inmatech, Inc. to produce and sell hybrid electric storage (HES) devices.

Each of these strategic alignments has helped to further perfect ALTe’s technology and ensure that the company is aligned with the best business partners available before production begins in 2012.

In response, John Thomas, CEO and co-founder of Alte said, “This is a very exciting time for ALTe and we are truly honored to be listed as one of America’s Most Promising Companies by Forbes. This award is a validation of the strategic alignments we’ve made and a show of support to our unique place in the alternative automotive market that ALTe identified and addressed with our range-extended plug-in hybrid electric vehicle powertrain.”

Also for the record, ALTe is one of only three companies listed in the Capitol Goods industry category, the only hybrid technology company and the only company from Michigan to appear on the list.

ALTe is the developer of a Range Extended Electric Powertrain used to repower light commercial vehicles. The system will be retrofit into existing fleet vehicles as well as used in “glider” applications of new vehicles to dramatically increase their fuel economy and lower emissions. Designed to replace a base V-8 internal combustion engine powertrain, the system’s patented technology improves fuel economy from 80 percent to 200 percent.

Based in Auburn Hills, Michigan, the company is headquartered in a 185,000 square foot facility where it will assemble its powertrains that will be shipped to Manheim installation locations across North America. For more information, visit http://www.altept.com.