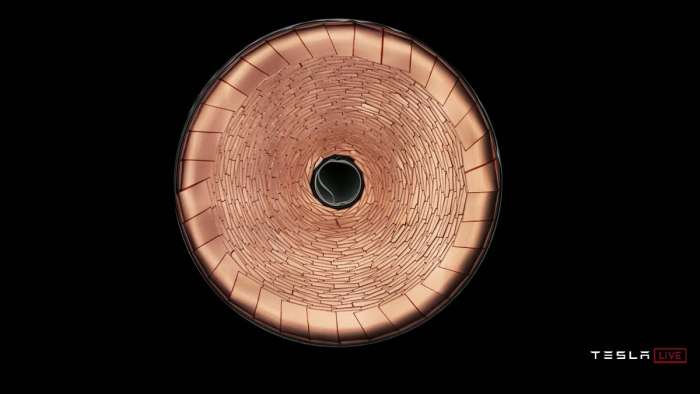 Panasonic following the company's Q2 results has said it plans to build 4680 cells for Tesla. According to Panasonic the company started work on the new cells immediately following Tesla's Battery Day event.
Advertisement

According to Reuters Panasonic is working to develop a new battery cell for use by Tesla. This will be based on Tesla’s 4680 cell format announced at the Battery Day event. Panasonic’s chief financial officer Hirokazu Umeda says the company has already started working on the new batteries.

“We started working on it immediately after Tesla’s Battery Day and are also preparing to set up a prototype production line in parallel,” said Umeda in a briefing following Panasonics Q2 results.

Tesla’s new 4680 cells house a number of manufacturing, cell design, and battery chemistry breakthroughs. These advancements altogether add up to decreasing the cost of a battery cell by 56%, increase energy density by 54%, and decrease the capital expenditure per kilowatt-hour by 69%.

A bigger battery, when compared with a smaller battery that has identical chemistry, just by its sheer size costs less and gives a higher energy density. The reason for this is, when the batteries are small the more cells we need to power a vehicle. That then adds to the manufacturing process and increases the none active parts of the cell and battery pack like the steel casing, fillers, and connectors.

So why didn’t Tesla make the batteries bigger from the start? The problem lies in the tabs. Charge can’t directly move from anode to cathode through the separator. As a result, electrons first have to move along the longitudinal axis of the anode before they can travel to the cathode. And the tab is needed to facilitate this connection above the separator. This increases the distance an electron has to travel between the anode and cathode. As a result, there will be an increase in resistance which causes heat buildup during fast charging. 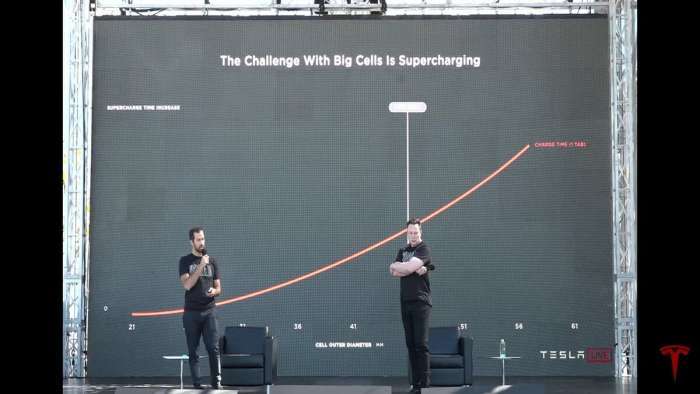 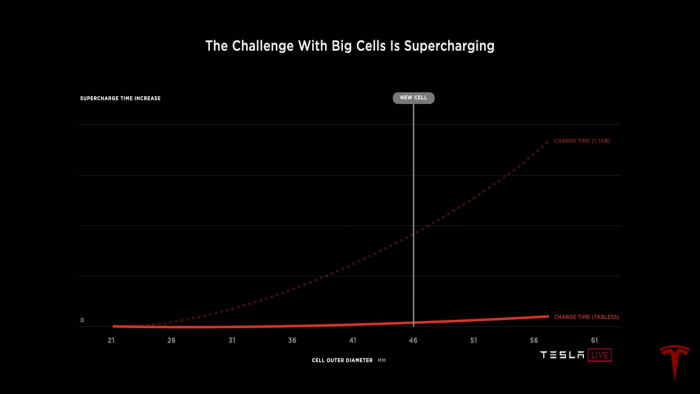 Here is where the first breakthrough comes in. A tabless design. Tesla was able to find a way for charge to pass through tiny laser-etched holes in the foil eliminating the need for tabs. This massively decreases the distance the electron has to cover. From 250 millimeters down to 50 millimeters. This Improves thermal performance, energy density, and simplifies the manufacturing process.

Related News: Tesla and Relations with Panasonic After The Battery Day

These improvements make it a no brainer for Panasonic to also be developing a battery with a larger cell format. Which then would mean a battery with a tabless design. However, one thing that is not clear is whether Tesla is working with Panasonic on the new cells or if Panasonic developed this technology in house.

“We have considerable know-how for that battery,” Panasonic’s Chief Financial Officer Hirokazu Umeda said at a briefing hinting Panasonic might have developed internal capabilities for the cell.

However, besides the bigger battery and most likely the tabless design, it is not yet clear if Panasonic’s new cells will incorporate Tesla’s other announced breakthroughs in the Battery Day event.

Some of the notable breakthroughs are a silicon anode instead of the graphite which is currently in Panasonic’s batteries. Also the removal of cobalt from the nickel-containing cathodes and many more.

Speaking at the Battery Day event Elon Musk has said Tesla needs all the batteries it can get its hands on. The company on top of massively increasing its cell production also plans to increase its batter purchase from its suppliers CATL, LG, and Panasonic. According to Tesla by 2030 the company plans to increase its battery output 100X to 3000GWh.

In the same briefing, Umeda said Panasonic will be launching an additional production line at the Nevada Gigafactory next year, increasing the plant’s total capacity by 10% to 38-39GWh a year by around 2022.

The partnership has been advantageous to both Panasonic and Tesla with Panasonic saying “We are targeting a profit margin of around 5% at our Tesla battery business within two to three years.”

So what do you think? Are you excited about Panasonic producing 4680 cells? Do you think it is licensing Tesla’s technology or do you think Panasonic is designing it in-house? Let me know your thoughts down in the comments below.

For more information check out: Elon Musk Thanks FSD Beta Testers And Emphasizes Importance Of Labeling In Video Also, see Tesla Starts Shipping Made In China Model 3s To Europe