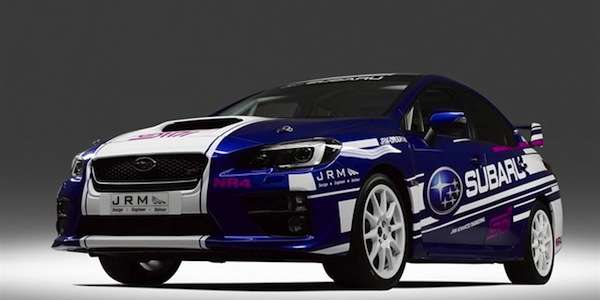 JRM confirms the NR4-specification 2015 Subaru WRX STI production rally car will make its first public appearance at the UK-based Rallyday show. What will fans get to see?
Advertisement

It’s a $159,000 rally car built by British motorsport specialist JRM in partnership with engineers at Subaru’s motorsport division in Japan, Subaru Tecnica International (STI). It’s the newest car of its type in the world and is eligible for use in the WRC 2, ERC 2 international championships, as well as other regional series. The newest rally STI will be driven hard and rally enthusiasts in the UK get a chance to see it next month.

The NR4-specification 2015 Subaru WRX STI will make its first public appearance on September 19 at the UK-based Rallyday show and will be driven by former professional works driver-turned test and development driver Terry Kaby. The UK-based Rallyday show will be the venue and the STI will take part in some high-speed track sessions. It will also be on static display in the Castle Combe race circuit paddock between demonstrations.

JRM’s Senior Sales Manager, Steve Smith says, “Rallyday is a hugely popular show that attracts rally fans of all ages so it’s a great opportunity for us to show the car in action, meet the people that are so passionate about Subaru rally cars, and to get some more testing mileage under our belts.”

JRM and STI took the production 2015 Subaru WRX STI and upgrades the performance sedan even more with special modifications to the 2.0-liter turbo engine, suspension, drivetrain and cabin. You can get the full specs here. JRM has also arranged two more customer evaluation tests for its NR4 Subaru. Prospective teams and drivers can test the car on either September 10 or 24 at the MIRA proving ground and test track in Leicestershire, UK.

Rally fans in the UK will get a chance to see the NR4-specification 2015 Subaru WRX STI production rally car for the first time on September 19 at the UK-based Rallyday show. Serious Rally teams with enough money get another shot at evaluating the car and can contact Steve Smith to discuss forthcoming testing opportunities with the team at [email protected] or by telephoning +44 (0) 7590 851862.