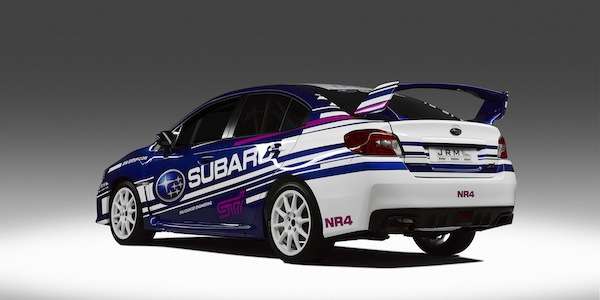 The 2015 Subaru WRX STI NR4 has finished endurance tests and the latest development phase is complete. What’s next for the production rally car?
Advertisement

Teams will have a chance today, Wednesday August 12, for a one-day test of the 2015 STI production rally car to see if they want to purchase the newest production rally car in the world that is eligible for use in WRC 2, ERC 2 and other regional championships. The WRX STI will be driven on the venue’s ‘ride and handling’ asphalt circuit.

Terry Kaby, who is JRM’s professional test and development driver, will be on hand to offer teams and drivers advice and technical insight into the new STI. The production rally car was designed jointly by JRM and Subaru Tecnica International’s (STI) engineers at Subaru’s motorsport division in Japan. The car has been specifically built to the FIA’s new-for-2015 NR4 technical regulations.

JRM and STI took the production 2015 Subaru WRX STI that already brings the latest vehicle technology, and upgrades the car even more with special modifications to the 2.0-liter turbo engine, suspension, drivetrain and cabin. You can get the full specs here. JRM says in their partnership with STI, they’ve taken the road-going WRX STI and developed it to win in rallying’s production category.

Teams who didn’t get a chance to make today’s testing of the 2015 Subaru WRX STI NR4 can get into JRM’s upcoming test days in the coming weeks. Interested parties can contact Steve Smith to discuss forthcoming testing opportunities with the team at [email protected] or by telephoning +44 (0) 7590 851862.

Tesla Contemplates A New Strategy for China Retail even As Sales Boom
Jay Leno on Elon Musk & EVs: “I Think He Should Get ... Credit"
END_OF_DOCUMENT_TOKEN_TO_BE_REPLACED