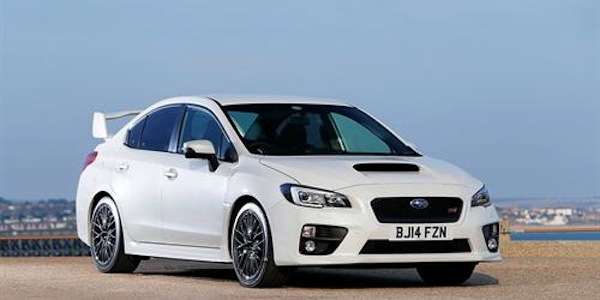 What makes Subaru WRX STI the best performance buy of 2015

Performance fans who already bought a new 2015 Subaru WRX STI should feel very good about their purchase. Why is STI the best performance buy of 2015?
Advertisement

There’s more good news for 2015 Subaru WRX STI buyers who are waiting to have their new performance car delivered or have already taken delivery. We reported yesterday that the 2015 WRX received ALG’s Residual Value Award and the sports sedan won the “Best Sports Car” award. The annual ALG Residual Value Awards honor the vehicles and brands that are predicted to retain the highest percentage of their original price after a conventional three-year period. Subaru is high on the list with three vehicles, the 2015 WRX, Legacy sedan and Outback wagon.

Now there’s more good news out of the UK from industry leader CAP in the UK. The experts at CAP have recently rated the new-generation 2015 Subaru WRX STI and says the performance sedan will retain over 48 percent of its value after three years of ownership. This compares with an industry average of under 40 percent and makes the new WRX STI sports car a great performance car purchase.

New owners will benefit from the limited supply of the performance sedans as well as Subaru’s reputation for build and reliability in all their vehicles. Legacy sedan and Outback wagon were recently recognized by Consumer Reports who compiled a list of the top ten cars most likely to go 200,000 miles. Two Subarus made the top ten list ; 2015 Subaru Legacy sedan and 2015 Subaru Outback wagon.

STI will retain its value

Subarus are known to go this many miles and more, and one thing you’ll notice about STI owners, is how long they hang on to them. Like a badge of honor, they watch the odometer to see it roll over the 100,000 mile and then 200,000 mile marks and beyond. Subaru WRX STI owners will likely keep their vehicles well beyond the three year mark, but if they decide to trade it in on a newer STI, the value will remain higher than other performance cars.

MUST SEE: 2015 WRX?STI remains one of the best performance car bargains on the planet

What makes the new WRX STI retain its value better than other performance cars? The WRX and WRX STI sedans are all new for 2015, and received new sheetmetal outside and interior dimensions grew. Fuji Heavy Industries in committed to the performance cars and poured extra resources into engineering to develop the new-generation sports cars. And it’s paying big dividends as this is the best WRX/STI to date. Subaru doesn’t offer many incentives for their entire lineup and this also will support high resale values for the new 2015 Subaru WRX STI. So performance fans get a sports car that cranks up the grin-inducing factor, STI can be used as a daily driver, it’s an all-weather vehicle and it’s a smart choice.