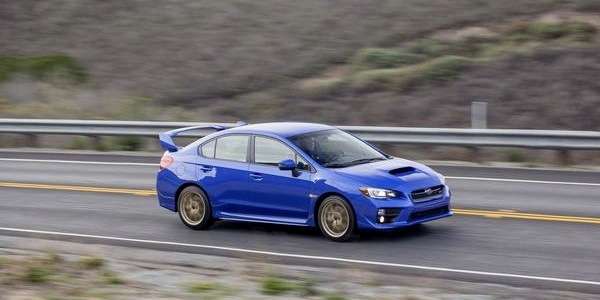 The 2015 Subaru WRX and WRX STI have been named to AUTOMOBILE’s All-Star list for 2015. Why does WRX STI remain the best performance car bargain?
Advertisement

The all-new-generation 2015 Subaru WRX and WRX STI are getting more recognition for their excellence in performance and driving dynamics. AUTOMOBILE has named the all-new WRX and WRX STI to its prestigious All-Star list for 2015. This new award adds to the long list of global recognition the performance sedans have received now. The two performance cars from Subaru were judged against every new car currently on sale in the U.S. and were deemed the two worthy to be just one of 10 cars to make the list in 2015.

WRX STI impresses on the track

It shows just how impressed AUTOMOBILE was with the sports cars. The brand’s collective editorial staff and contributors cast their private ballots after three days of driving a variety of 2015 model year contenders at GingerMan Raceway in South Haven, Michigan, as well as on public roads.

Here’s what they said about the 2015 WRX STI. Editor-in-Chief Mike Floyd commented on the new STI; “Whipping the WRX STI around the track was one of the great pleasures of All-Star week, with its magnificently notchy six-speed and all-wheel drive allowing for effortless drifts into GingerMan Raceway’s sweepers.

MUST SEE: How Subaru developed the STI on the Nurburgring

Subaru brought the WRX to global recognition through their involvement in World Rally racing. It was first introduced in the U.S. in 2002 and its following continues to grow with each new generation. AUTOMOBILE is impressed with WRX and thinks this generation was improved over the outgoing model. Floyd commented, “Subaru has continued to build positively on what has become an iconic lineup for the brand. The WRX also just keeps getting better while maintaining its essential all-wheel DNA and remains one of the best performance-car bargains in the world. It’s a lineup most worthy of 2015 All-Star status.”

Subaru has developed a unique blend of power and driving dynamics that makes the WRX/STI fun to drive. They both come standard with Subaru’s Symmetrical All-Wheel Drive and the 2015 WRX gets a new 2.0-liter turbocharged four-cylinder 268 horsepower engine, mated to a first-ever six-speed manual transmission. The higher-performance 2015 WRX STI sedan features the same turbocharged, 2.5-liter boxer four-cylinder engine that produces 305 horsepower but gets significant upgrades to the performance suspension. Both cars have been significantly improved for performance enthusiasts.

WRX/STI remains one of the best performance car bargains

It’s hard to find a better performance car bargain than the new-generation 2015 Subaru WRX/STI sports sedans. WRX starts at $26,295, WRX STI is priced at $34,495. But the WRX/STIs are not easy to come by. Eager buyers are having to wait 4-6 months in some cases around the U.S. to get their new sports cars.

AUTOMOBILE has named the all-new 2015 Subaru WRX and WRX STI to its prestigious All-Star list for 2015. The two cars were judged against every new car currently on sale in the U.S. and are just 10 cars selected to the All-Star list. AUTOMOBILE found out what Subaru WRX/STI fans have already known for decades. MY2015 WRX/STI remains one of the best performance values on the planet.

NOSAJ wrote on November 18, 2014 - 10:18am Permalink
I agree the WRX/STi is best performance car bargain on the planet