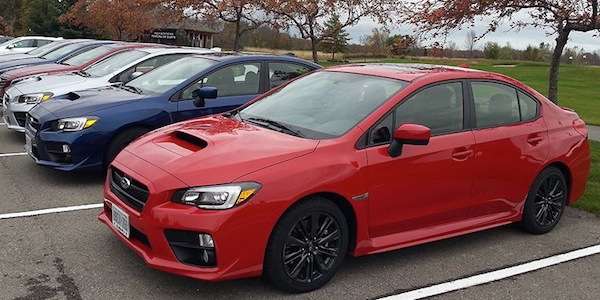 2015 Subaru WRX/STI buyers are having to wait 4-6 months to get their new performance cars. Why such long waits and what is Subaru doing about it?
Advertisement

Subaru has seen record sales in the U.S., their biggest market by far, and they can barely keep up with the demand. Subaru is seeing record sales of the 2015 WRX/STI line, and they are also selling a record number of the new Forester, Legacy and Outback multi-use vehicles. But performance fans are now waiting anywhere from 4-6 month’s to get their new WRX/STIs after they have placed their order.

The WRX/STI is built at the Subaru Gunma factory in Japan and of course have to be shipped to the U.S. Subaru makes 80 percent of its vehicles in its home country compared with 21 percent for rival Honda. Subaru does have a plan to expand production at its U.S. plant in Indiana, but that won’t happen until 2017. Fuji Heavy Industries (FHI) plans to expand its sole plant in the U.S. with a goal of making 310,000 cars there annually, up from 200,000 currently by 2017.

FHI focused on quality over quantity

It’s good news for Subaru buyers, because Subaru is more concerned with keeping the quality high in their vehicles. Yasuyuki Yoshinaga, Fuji Heavy’s chief executive, in an interview with the Wall Street Journal said, “We make a small number of limited types of cars and we can’t simply be following the footsteps of other Japanese companies going global. Our strategy is to have a high domestic production rate regardless of the currency rate, and to have special care for quality.”

It’s worth the wait

2015 WRX/STI buyers are having to wait up to six month’s for their performance sedans but the wait is worth it. Anyone who has driven the new generation models are definitely impressed with the changes Subaru and STI made to the new sedans. The WRX STI went through extensive testing on the Nurburgring in Germany to ensure performance fans would not be disappointed in performance. Even though 2015 Subaru WRX/STI buyers are waiting, it’s worth the wait. WRX/STI buyers who have finally received their cars are happy they waited.

Carl wrote on November 17, 2014 - 12:59pm Permalink
I think this also depends more upon the dealer allocation and how many are already ordered from that dealer. Right now my local dealer is only looking at the 12 week lead time that you normally would have for an ordered from Japan unit. And that's with 50% of their allocation pre-sold. I suspect people that are having to wait longer, the dealer simply has no other allocation available, so as soon as a slot opens up, that's when it's getting filled.