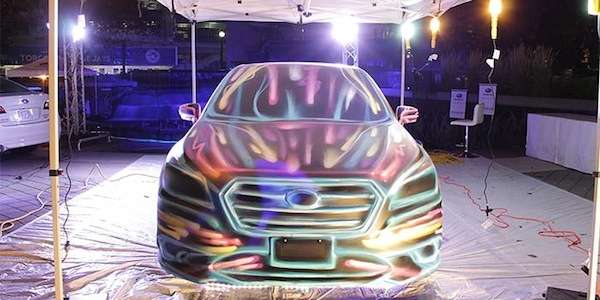 Watch 2015 Legacy get transformed into an amazing art form [video]

It’s Friday and time for a little fun with the 2015 Subaru Legacy sedan. Auto journalists are way too serious most of the time, especially here at Torque News, and here’s a cool video with awesome music to make your Friday go by a little quicker. This story has no redeeming value and won’t be touting the most powerful 707hp muscle car that has arrived on the scene.

Every year in October, the weekend before the Canadian Thanksgiving, artists descend on Toronto from sunset to sunrise to light up the city. Subaru returned again to this event, and presented Wild Air Vision Electro by Canadian artists Gene Pendon and Marisa Gallemit to do their handiwork on the cars. The artists transformed a new 2015 Subaru Outback crossover and 2015 Legacy sedan over the course of the night. One used paint, the other used sculpture and both re-interpreted the exterior of the vehicles.

Under the direction of four curators, 48 temporary public art projects by local, national and international artists were commissioned. Some works encourage an intimate encounter with art, while others wow with large-scale spectacle. Toronto artists, cultural and educational institutions, museums, galleries and neighborhoods participate in Scotiabank Nuit Blanche each year by producing one-of-a-kind projects that transform the city for one special night.

Art and technology fused together

Of course this is marketing for the Japanese automaker and attendees get to experience Subaru’s new-generation 2015 Legacy and Outback in a very unique way. The artists showcased the vehicle’s relationship between the outdoors and the engineered. They “harmonizing EyeSight Technology and the spirit of adventure.” The music on the video below is from Morgan Page feat. Lissie - Longest Road (Deadmau5 Remix). Have a fun Friday and enjoy the video below.