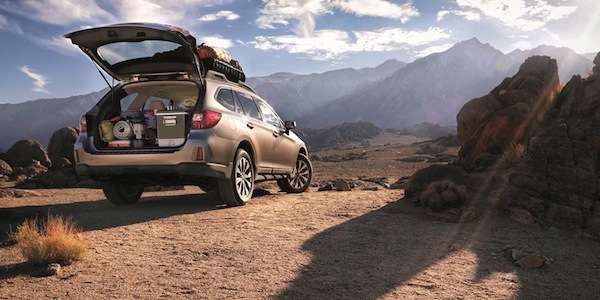 Subaru of America is selling more new 2015 Outbacks and Legacy sedans than expected. Why would this be a problem?
Advertisement

Subaru has a big problem on their hands and they are enjoying every minute of it. Subaru had to revise its 2014 full-year sales forecast from 460,000 to 500,000 vehicles. The reason for the revision is because they are selling more 2015 Outback wagons and Legacy sedans than they expected. Subaru says that sales for 2014 are now expected to exceed the previous best selling year of 2013 by more than 17 percent.

Subaru of America has already set its fifth consecutive sales record in 2013, as sales jumped to 424,683 vehicles. That was 26 percent more than the record sales of 2012. And it looks like they are on another record pace for 2014. This is partly because of the new 2015 Subaru Outback and 2015 Legacy launches this year. They have caused the Japanese automaker to revise upward its 2014 sales forecast, beyond its initial record-setting target.

This could be a problem for Subaru

Subaru is already experiencing supply issues because of their lack of production capacity at their Indiana plant. They are expanding production space to make room for the new-generation Impreza that’s coming soon. But Subaru may be growing at a clip that they can’t handle if sales keep growing at these record rates. Now the brand is predicting sales in the U.S. to exceed half a million units for the first time by year end.

Following their first full month on sale, the new-generation 2015 Subaru Legacy and Outback each set sales records for the month. Outback had its best August ever while the 2015 Legacy posted its best month since August 1995. It’s a good problem to have, but it could hurt the Japanese automaker if they can’t meet customer expectations. Can they keep growing and keep a new generation of buyers happy?

Does Subaru need to be worried?

Subaru of America is doing better than expected, but it could hurt them if they can’t keep their customers happy. Thomas J. Doll, president and chief operating officer, Subaru of America, Inc. of course thinks it's positive and said, “Our strong market performance has caused us to increase our year-end sales forecast beyond the notable 500,000 sales mark. The market is telling us that we are delivering products that consumers want at the right prices. When this compelling product is then reinforced by strong retailer representation and backed by a brand that consumers identify with, we can be positive on our future results.”

Subaru of America has now seen 33 consecutive months of year-over-year growth and over the past five years has moved from a niche market player to a mainstream brand. The new-generation 2015 Subaru Outback wagon and 2015 Legacy get new upgrades and have seen impressive sales. But will Subaru be able to expand production fast enough to keep their new customers happy?

kaelley wrote on September 15, 2014 - 4:08am Permalink
My favorite part of this is when they expressed their concern about the stress that the increased production is having on Subaru's associates.
Angelo Milia wrote on December 17, 2014 - 2:41am Permalink
i first ordered a 2015 Subaru Limited but dealer couldn't produce it. We settled on a 2015 Subaru Forrester Limited for wife who loves it. I personally would have loved to get the outback with its revised new body& safety features. Very disappointed But happy for wife. It's out fifth Subaru.