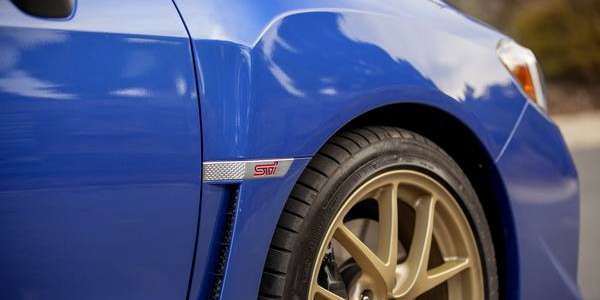 We test the all-new 2015 Subaru WRX STI Launch Edition. Who should and shouldn’t buy the newest STI performance car?
Advertisement

This week we got our hands on the all-newly designed 2015 Subaru WRX STI Launch Edition. It’s a performance car that isn’t for everyone. Who should buy it and who should walk away? We will attempt to answer those questions for you. We’ll take a look at what’s new for the new-generation sports car from Subaru and see what many people won’t like about it. Let’s be honest, the STI is for true performance fans and it won’t appeal to everyone. There’s five reasons you might want to walk away. But first we’ll look at what’s been upgraded on the new-generation STI.

The 2015 Subaru WRX STI gets completely redesigned inside and out. To the dismay of many fans, STI stays with the 305 horsepower and 290 pound-feet of torque 2.5-liter turbocharged four cylinder boxer engine. But the new WRX STI four-door sedan gets a longer platform, more interior room and new standard features. But it only comes in a sedan body style, so gone for now is the five-door hatch. But don’t worry, Subaru will likely bring it back in 2017.

Subaru brought the first STI to the U.S. market in 2004 and the 2015 model is light years better than the first-generation performance car. Subaru also just launched the 2015 WRX and it sets itself apart from WRX in dramatic ways. STI gets a stiffer chassis, firmer springs and quicker steering (13.0:1 ratio). The steering is still controlled hydraulically, unlike many competitors that now use electromechanical systems.

This week we drove the 2015 Subaru WRX STI Launch Edition, and had it eight enjoyable days because of the holiday. Launch Edition gets the iconic WR Blue Pearl paint and gold-painted 18-inch BBS alloy wheels. It also gets a special interior featuring blue highlights and comes standard with the STI Short-Throw Shifter for the 6-speed manual gearbox. Other extras include a Keyless Access & Start system, offered as an option on WRX STI Premium and Limited models. STI Launch Edition is priced at $37,395 plus $795 destination.

Climbing aboard, we noticed the new thicker flat-bottomed steering wheel with integrated audio and Bluetooth, standard leather and Alcantara upholstery and new multi-information central display with 4.3-in. LCD screen. The cabin does feel roomier and the extra inch added to the wheelbase gives the driver and rear passengers more legroom. We also noticed more soft-touch materials on the dash and door trim. Upgrades over the outgoing model include standard dual-zone climate control, heated seats, satellite radio capability, rearview camera and LED headlights.

The performance-design front seats are a strong point in the STI. Normally this driver gets cramps in my right leg after driving for awhile. Probably because I have my foot buried in the gas pedal. But these STI seats are the most comfortable seats of any car I’ve driven. We spent hours in this car and my leg never cramped up once. And they kept us firmly planted in the seats during spirited driving this week.

Subaru WRX STI on the road

Ok, here is where it gets fun. We drove the new 2015 Launch Edition STI in a multitude of conditions and roads to test out the performance car. We have the privilege of living near Denver Colorado where we can test the sports car in a number of mountain and varying terrain situations. We didn’t drive the STI on the track, which would have been the ultimate test. But the Colorado terrain with its curvy mountain roads is the next best thing.

The first reason not to buy the STI is because it comes with an extra firm suspension that was developed by STI for Rally racing. If you don’t like a stiffer ride, you might want to look at a Lexus F-Sport. STI is designed for performance fans who will likely take it to the track. It’s really the only way to experience all the potential this car offers. But with the stiffer suspension, STI also comes with incredible cornering ability. We had three opportunities to test it out.

Another reason to walk away from the STI is the rear wing. Most people think it looks gaudy, but the big wing on the back actually serves a very specific purpose. It keeps the rear wheels firmly planted on the ground at high speeds. The faster the car goes, the more downforce it provides in the rear. As we were driving the car down I-70, I noticed a Ford Mustang GT in my rearview mirror. He passed me and looked over and laughed as he flew by me. It was a curvy stretch of highway and I sped up and passed him on a twisty section and looked down as I hit 100 mph. He caught up with me after the road straightened out and gave me a thumbs up. I just smiled as I exited the Interstate.

On another section of road getting off Hampden onto C470, the off ramp has a sketchy design flaw with two tight curves and needs to be taken at 40 mph max. If you don’t, your car will end up in the ditch. As I approached the off ramp, I slowed from 70 to 65 and took the two corners at highway speeds without slowing down. The STI carved through the corners like they were nothing. This is why performance fans buy the STI. On another mountain road, we took the multiple tight corners over a three mile stretch at high speeds and the STI felt like it was on rails. It hugs the road like nothing else out there. With it’s all-wheel drive system, it’s hard to break the 245/40R18 summer performance tires free.

The third reason not to buy the 2015 Subaru WRX STI is because you will be a target for the local law enforcement. As I drove the car during the week. I noticed I was attracting the attention of the Colorado State Patrol. It seemed like there were extra speed traps that I normally don’t see during the week. It’s hard to hide the WR Blue Pearl paint, gold BBS wheels and large STI wing and we stuck out among the other cars. If you don’t like driving with a rubber neck, look else where for a performance sedan.

Reason four to stay away from the 2015 STI. It only comes with a 6-speed standard gearbox. If you are looking for an automatic, you won’t want the STI. This performance car comes with a performance clutch that’s a bit stiffer and if you don’t like to shift often, you’ll get tired quickly. If you commute to work and drive in stop and go traffic, you’ll likely get annoyed. But if you like to drive, the close ratio 6-speed gearbox is a real treat, and the STI Short-Throw Shifter in the Launch Edition is worth every penny.

Reason five? STI is a performance car and the 2.5-liter turbocharged boxer engine isn’t designed for putting around town. You will be disappointed if you are looking for a family cruiser that momma needs to drive. She won’t like the fact that the engine responds most after you get the rpm’s up. This car isn’t designed to just be driven to the grocery store. WRX STI features a rally-bred drivetrain that has deep roots in Rally racing. It’s excellent all-wheel drive handling is better suited for the track than it is getting you home in a snowstorm, although it will get you home safely. This sports car needs to be exercised regularly in order to stay happy. The worst thing that could happen, would be to get your new STI and then have to sell it because momma doesn’t like the extreme performance characteristics this car offers. It just begs to be driven fast.

If any of these reasons hit home, you may want to look elsewhere. The 2015 Subaru WRX is a good solution for those not wanting a full-blown STI. It’s a milder version, but with all the fun of a great performance car. And it comes with a new CVT automatic for momma. You can read the full 2015 WRX review here.

But the 2015 Subaru WRX STI is a great choice for those wanting extreme performance and driving characteristics. There’s really nothing else like it except for the Lancer Evolution, and it’s going away soon. STI starts at $34,495 plus $795 destination. It’s available now in Subaru showrooms.