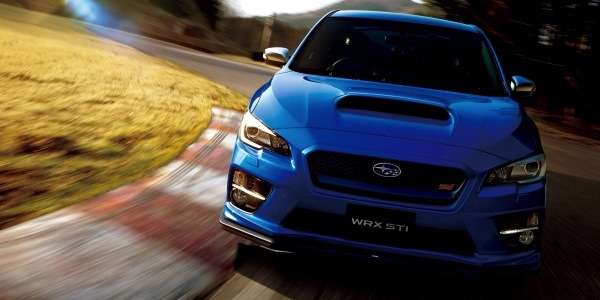 We knew it would be coming in the new-generation 2015 Subaru WRX STI, because Subaru and STI have been testing the new higher-performance 2.0-liter direct injection turbo "DIT" boxer engine. The new engine was perfected in Subaru’s motorsport involvement and produces even more hp than the engine that comes in the new 2015 WRX S4 that launches today in Japan. Right now, Subaru launches the new 2015 STI with the 2.0-liter in the Japan market and it goes on sale today.

The new 2015 Subaru Japan model WRX STI is powered by a new high performance 2.0-liter turbo boxer engine that was perfected in motorsport by STI. Subaru has tuned the new 2.0-liter to produce an impressive 227 kW (304 hp) and 422 Nm (311 lb ft of torque). That’s a significant jump from the 2015 WRX S4 that launches in Japan. Subaru has been perfecting the new 2.0-liter powerplant in the 2015 WRX STI Nurburgring 24-hour race car this year. The testing was done by the Subaru Tecnica International's (STI) race team.

How did STI do it?

Subaru runs the 2015 WRX STI Nurburgring car in the SP3T class, for turbocharged engines displacing 1.75 to 2.0 liters, and runs in a competitive class with racing versions of cars from Audi, Volkswagen and Seat. Subaru has been testing the engine under severe race conditions and it’s proven to be a great engine. Many believe it’s a better engine than the production 2.5-liter the new STI comes with in all other global models.

The new 2015 WRX STI 2.0-liter engine uses a combination of direct injection, high compression (10.6:1), Subaru Dual Active Valve Control System (D-AVCS), a twin-scroll turbocharger and an intercooler to get improved performance over the similar Forester XT version. The WRX STI NBR version uses different cams and higher-rate valve springs and other enhancements to enhance the performance envelope. The production 2015 WRX STI 2.0-liter gets a broader torque curve and peaks at 311 lb.-ft. at 4,400 rpm.

The 2015 Subaru WRX STI NBR race car finished 4th at Nurburgring 24-hour 2014 in Germany this year. The engine held up extremely well and the STI team would have finished higher if not for the crashed-plagued race in the rain. Subaru announces the all-new Japan market 2015 WRX STI and it’s coming with the new 2.0-liter motorsport-developed powerplant. We wonder how long before we see it in other global markets?