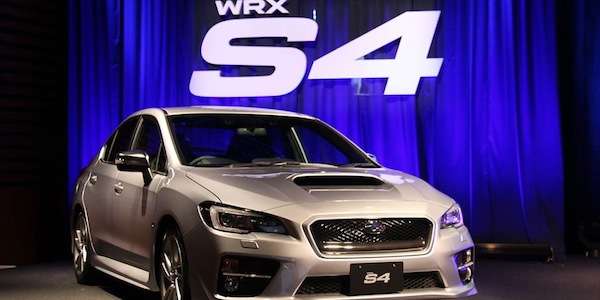 Subaru has just announced the all-new 2015 WRX S4 Japan-only model and it comes with a few extra goodies the U.S. models don’t have. The sporty new 2015 Subaru WRX S4 is available today for performance fans in Subaru showrooms across Japan. What sets the WRX S4 apart from the rest of the global models?

Subaru wants to appeal to a larger audience

Subaru says they have succeeded in crafting an accessible sports sedan that can be enjoyed by all drivers while still offering all the excitement of a performance vehicle. This was Subaru’s goal with the new 2015 WRX S4 that will only be available for the Japanese market. But it comes with extras that the other global 2015 WRX models won’t see. At least we won’t see them for now. What extras does WRX S4 come with?

A new level of safety

The Subaru brands core value id safety and WRX S4 comes with the best new technology. The S4 will be the first WRX model to be equipped with Subaru's EyeSight driving assist system that will give the performance sedan an enhanced level of safety. This new-generation safety system features more advanced safety features including driver assistance at wider angles and longer distances, and color recognition.

The big news for the 2015 Subaru WRX S4 is the new 2.0-liter engine that will power the new performance model. S4 is equipped with a new high performance 2.0-liter direct injection turbo "DIT" boxer engine. The new engine was perfected in Subaru’s motorsport involvement and produces 221 kW (296 hp) and 400 Nm (295 lb ft of torque). That’s a significant jump from the other global models. Subaru has been perfecting the new 2.0-liter powerplant in the 2015 WRX STI Nurburgring 24-hour race car this year. The testing was done by the Subaru Tecnica International's (STI) race team. Subaru says it will achieve 31 mpg in the JC08 mode Japanese cycle test.

The 2015 WRX S4 will only be offered with the new Subaru Sport Lineartronic CVT automatic transmission. The Japan-only S4 won’t be coming with the new 6-speed standard gearbox that most other global markets will get. Subaru wants to appeal to a wider audience and this is a big step in that direction for the S4. We’ll see how performance fans in Japan react to this news.

Other 2015 Subaru WRX S4 stories of interest.
2015 WRX ranks number one in Subaru’s lineup in this important category