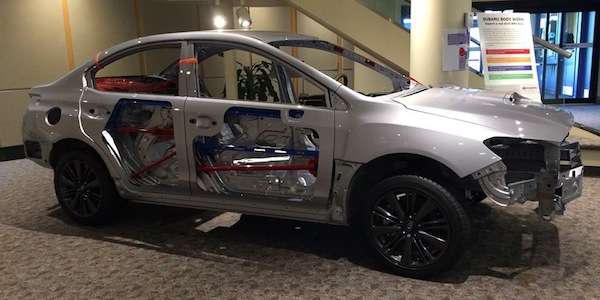 Subaru safety began in the 60s

Safety isn’t new for Subaru. They have been committed to safety since the 60s when they began conducting their own tests long before there was any official testing being conducted. But Subaru wasn’t satisfied with the WRX and WRX STI’s level of safety and wanted to make changes to improve occupant protection in the small overlap frontal crashes.

This is a result of Subaru engineers improving the already effective ring-shaped reinforcement frame used in all Subaru vehicles. Subaru's ring-shaped reinforcement frame has been used for more than a decade and has proven very effective. The 2015 WRX/STI have been enhanced even more to provide better protection in the structure increasing cabin rigidity and absorbing impact energy from any direction. This is the design that gives the superior protection that enables all their vehicles to keep achieving these safety awards year after year.

The 2015 Subaru WRX STI is now a IIHS Top Safety Pick for the first time. Earlier this year, 2015 WRX had been rated a top pick,and then in May, IIHS gave the 2015 WRX STI the award for good performance in each of the Institute’s crashworthiness evaluations, including the small overlap front test. This is the first time IIHS has rated the WRX and WRX STI, and both came through the test with flying colors.

How did Subaru accomplish this?

The new 2015 WRX/STI gets significantly greater amounts of high tensile steel that produces both handling and safety benefits. Subaru developed a new stiffer suspension on the new-generation STI, and combined with the ring-shaped reinforcement frame that Subaru uses on all their vehicles, it also translates to an even more thrilling ride on the sports car.

Other new safety features for the 2015 model

The 2015 WRX STI also gets a new driver’s knee airbag, reversing camera and even better visibility, with wing mirrors located on the doors, reducing blind-spots. This all helps the 2015 WRX/STI maintain Subaru’s commitment to five-star occupant safety.

The 2015 Subaru WRX and WRX STI are built to not only be fast, but safe. That’s comforting when your’e driving fast on the track and also on the street where anything can happen.