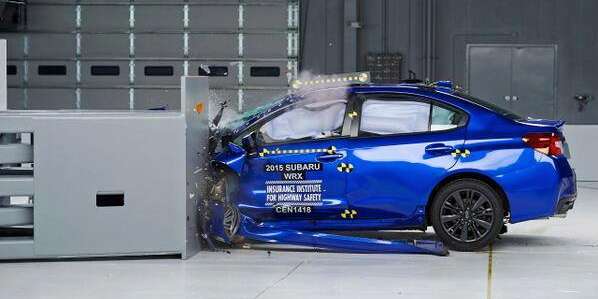 Subaru announced that the 2015 Subaru WRX STI and WRX are top IIHS safety picks. This is a first-ever for the STI.
Advertisement

The IIHS loves to get their hands on Subarus and tear them up. The 2015 Subaru WRX STI is now a IIHS Top Safety Pick for the first time. We knew the 2015 WRX was a top pick, but IIHS has now made it official that the 2015 WRX STI has also received the award for good performance in each of the Institute’s crashworthiness evaluations, including the small overlap front test. This is the first time IIHS has rated the WRX and WRX STI, and both came through the test with flying colors.

With the addition of the all-new-generation WRX STI and WRX getting the award from IIHS, Subaru now has six models in their lineup that have earned 2014 safety awards from IIHS. It shouldn’t be a surprise, because Subaru has had more 2014 IIHS Top Safety Picks than any other brand for years. They designed the new 2015 WRX STI with the same ring-shaped reinforcement frame that the other models in the lineup get to make them the safest vehicles on the planet.

How did Subaru accomplish this? The new 2015 WRX STI gets significantly greater amounts of high tensile steel that produces both handling and safety benefits. Subaru developed a new stiffer suspension on the new-gen STI, and combined with the ring-shaped reinforcement frame that Subaru uses on all their vehicles, it also translates to an even more thrilling ride on the sports car.

There are also new safety features for the 2015 model. The 2015 WRX STI also gets a new driver’s knee airbag, reversing camera and even better visibility, with wing mirrors located on the doors, reducing blind-spots. This all helps the new STI maintain Subaru’s commitment to five-star occupant safety.

"Safety is one of our brand tenets and so we are extremely proud to have earned a TSP rating for our performance models" said Thomas J. Doll, president and chief operating officer, Subaru of America, Inc. “we are committed to providing engaging driving together with safety and this award is testament to that commitment.”

Subaru is the leading automaker in safety and has achieved a Top Safety Pick from IIHS for the new WRX STI and WRX performance sports cars. The new-generation STI is getting ready to launch this spring and performance enthusiasts can be confident that the new 2015 Subaru WRX STI and WRX are one of the safest performance cars in the world.