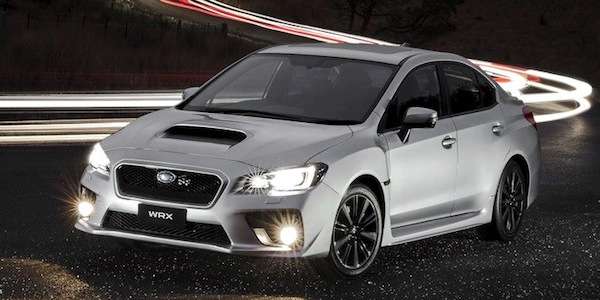 The all-new 2015 Subaru WRX is about to make its dealer launch and is the top performer in one very important category.
Advertisement

The new-generation 2015 Subaru WRX makes its dealer launch this spring, and is the top performer on the street and track, but it also outperforms every other Subaru vehicle in safety. Subaru has been getting lots of recognition for its focus on safety because they are the only automaker in the world with the distinction of earning IIHS Top Safety Pick awards for every model it builds and has done so four consecutive years. But the 2015 WRX is tops among all Subarus.

Now, the 2015 Subaru WRX offers new levels of performance and technology, but it doesn’t come at the price of safety. In fact, the new-generation WRX is super-safe. WRX is in line with the entire Subaru new car range and has a five-star rating for occupant safety from the highly respected and independent Australasian New Car Assessment Program (ANCAP).

WRX also received “good” pedestrian and whiplash ratings. But the WRX is the best of any Subaru vehicle when it comes to its overall safety rating. WRX’s overall ANCAP score of 35.85 out of a possible 37 makes it the highest ranking Subaru yet, in a range already renowned globally for its structural integrity.

How did Subaru accomplish this? The new 2015 WRX gets significantly greater amounts of high tensile steel that produces both handling and safety benefits. Subaru developed a new stiffer suspension on WRX, and combined with the ring-shaped reinforcement frame that Subaru uses on all their vehicles, it translates to an even more thrilling WRX ride.

There are also new safety features for the 2015 model. The 2015 WRX also gets a new driver’s knee airbag, reversing camera and even better visibility, with wing mirrors located on the doors, reducing blind-spots. This all helps WRX maintain Subaru’s commitment to five-star occupant safety.

A spokesman for ANCAP said, "In recent years we've seen manufacturers achieve vastly improved results with the majority of major brands now building to five-star standards. What we want to see now is manufacturers striving beyond the requirements, offering even higher levels of structural and active safety to consumers." The Subaru brand is doing this across its lineup, and the new WRX is the best of all the Subaru vehicles.

Subaru is the leading automaker in safety and has achieved a five star rating from ANCAP for the new WRX performance sports car. The new-generation WRX is getting ready to launch this spring. Performance enthusiasts can be confident that the new 2015 Subaru WRX is one of the safest performance cars in the world.